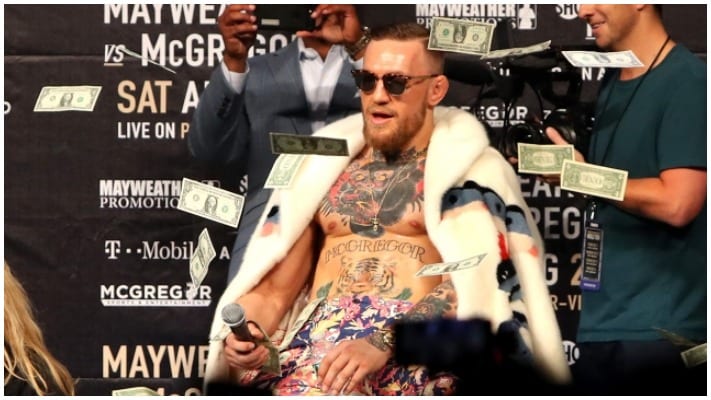 ‘Notorious’ is set to square off against ‘The Diamond’ at UFC 264 which will take place on July 10 at the T-Mobile Arena in Las Vegas.

The Irishman has a rich history with Poirier heading into this weekend’s blockbuster event.

McGregor previously beat the former interim lightweight champion in double-quick time when they first met in 2014.

Earlier this year, Poirier avenged that defeat at UFC 257. The Lafayette, Louisiana native wrestled early before utilizing leg kicks and elite-level boxing to close the show inside two rounds.

McGregor already holds the record for the highest-grossing UFC pay-per-view event of all time. ‘Mystic Mac’ is believed to have done in excess of 2.4 million buys for his grudge match with Khabib Nurmagomedov at UFC 229 in October 2019.

In an interview with Rolling Stone, McGregor spoke with optimism about breaking that record at UFC 264.

“It’s thrilling. I’ll break records on the PPV. I know that’s the expectation,” McGregor said. “I’ve been in big fights before, and it’s always electric, and this one will probably be the biggest so far. Having fans there this time is going to add even more to the atmosphere. So, I’m truly so excited, and I’m going to put on a show.

“Saturday night is going to be f*cking insane,” White told MMA Junkie. “Most celebrities ever at an event in the last 20 years, more pre-buys ever. All of you out there, if you know that you’re going to watch the fight on Saturday night, buy it now. Don’t wait until Saturday when 3 million other people are trying to do it and you have a hard time getting it in. We have the most pre-buys ever right now and believe me, go to ESPN+ and do it now.”

Do you agree with Conor McGregor? Will UFC 264 break the PPV record?