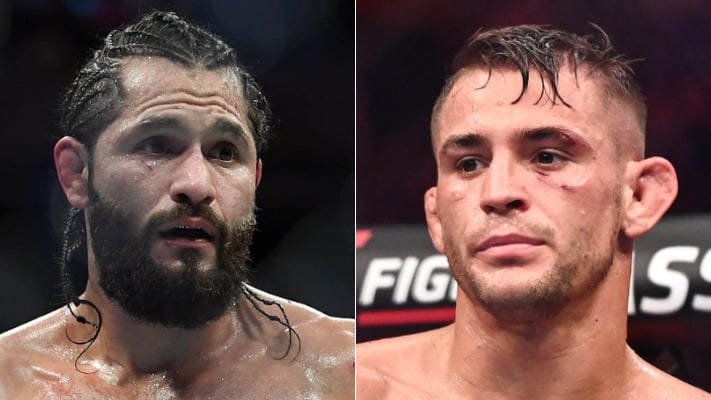 Masvidal has been training with Poirier on a plethora of occasions leading up to “The Diamond”‘s matchup with McGregor in a pivotal lightweight matchup. The winner will more than likely be the next title challenger to lightweight champion Charles Oliveira’s belt later this year.

In a recent appearance on the UFC 264 betting preview show, Masvidal provided some insight into the matchup between the two lightweight stars and more specifically; what training with Poirier has been like.

“He’s in phenomenal shape, man,” Masvidal said. “I’ve been there since the start of the camp. He came in in shape. He wasn’t messing around. He knew that the third fight was going to happen at some point. It’s not like he went home and gave himself any slack. He came back full six-packed out, doing five rounds. Usually, I see him progress and he gets better every week.”

“He faced him twice. He’s got a lot of strategies going into it. I think standup anyway because he’s dealt with it on two occasions, he knows how quickly he can find his timing. I don’t think he’s going to catch him by surprise, even on the feet. But I think that’s one of Conor’s biggest strengths.”

Masvidal announced recently that he’s looking at a return to the UFC octagon sometime this Fall, and more specifically a possible fight against the returning Nick Diaz or top welterweight contender Colby Covington.

Poirier enters the trilogy bout with a ton of momentum after knocking out McGregor earlier in January at UFC 257. It is widely anticipated to be one of the biggest pay-per-views in UFC history in the promotion’s return to T-Mobile Arena in Las Vegas.

What are your thoughts on Jorge Masvidal’s comments regarding Dustin Poirier vs. Conor McGregor 3?