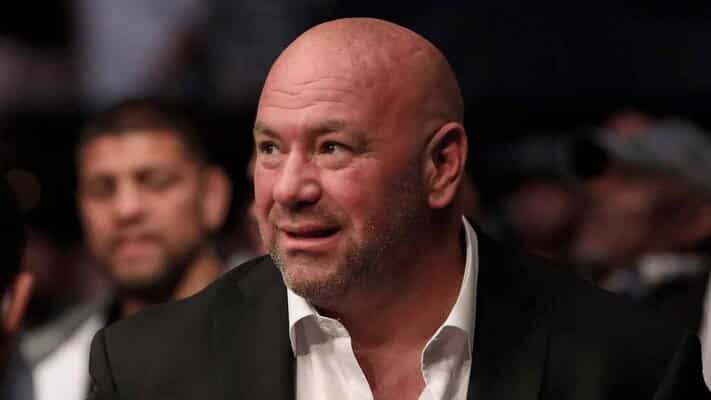 According to Dana White, The 45th President, Justin Bieber and comedian Dave Chappelle are only a few names to expect amongst the UFC 264 celebrity guest list.

Ahead of the blockbuster trilogy match between Poirier and McGregor taking place this weekend at the T-Mobile Arena in Las Vegas, Dana White (President of the UFC) spoke with TSN’s Aaron Bronsteter, where he dropped a few names of celebrities we can expect to see this weekend.

White told TSN that amongst the 45th US President Donald Trump, Bieber, Chappelle, Kevin Durant, Odell Beckham Jr, Machine Gun Kelly, Megan Fox, Mel Gibson, Kourtney Kardashian and Travis Barker are others to expect with the celebrity guest list growing by the minute. White went on to state his excitement for the bout urging fans to purchase their pay-per-view in advance due to the increasing demand.

Trump recently made an appearance at UFC 244 back in Nov 2019 in New York where he was spotted cage side. Trump had been in attendance for the BMF (Baddest Mother F**ker) Title bout between Masvidal and Diaz. The 45th President became the first U.S. President to attend a UFC event. With Trump being a fan of the UFC, it is no surprise that he will be making an appearance this weekend with the stacked sold out card bringing life back to Vegas.

In an interview with Brett Okamoto of ESPN, White had confirmed that UFC 264 was not only set to be one of the most spectacular events to take place in Vegas but that it was also set to have more celebrity fans in attendance than any other UFC event in all of the companies history.