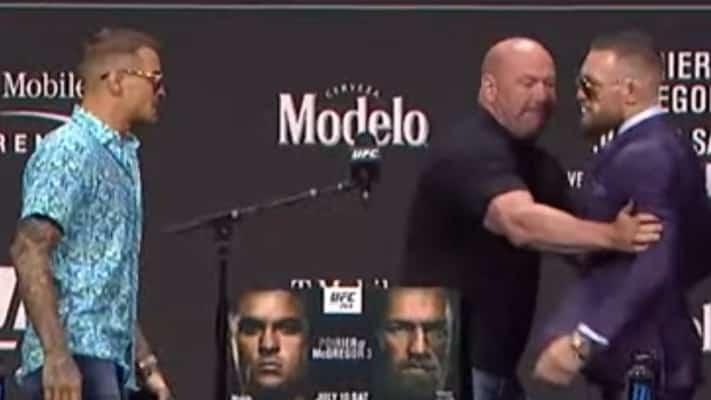 Conor McGregor and Dustin Poirier have had their fair share of back-and-forths since their last bout at UFC 257. Their highly-anticipated UFC 264 pre-fight press conference featured everything from wife jokes to “McGregor FAST” mockery, and before the war of words, McGregor attempted to start a fight with Poirier just two days away from their trilogy.

As the two UFC lightweight contenders made their way to the stage at T-Mobile Arena to answer questions from members of the media, McGregor charged at Poirier shortly after tossing bottles of his hot sauce into the crowd of fans. UFC president Dana White had to separate the two for a couple of minutes before the press conference could begin.

The trilogy between McGregor and Poirier is without question one of the biggest trilogies in combat sports history, and arguably the biggest in the history of the UFC. Couture vs. Liddell, Cormier vs. Miocic, and Edgar vs. Maynard are just a few of the matchups that come to mind in comparison.

After the buildup to their last fight which was relatively tranquil in comparison, it appears that the love between the two is all but lost ahead of their massive fight. Despite McGregor’s barrage of insults and verbal assaults, Poirier remained relatively unbothered by the extracurriculars that come with a McGregor fight.

The winner of the McGregor-Poirier trilogy is pretty much confirmed to get the next shot at UFC lightweight champion Charles Oliveira’s title. Oliveira earned the vacant belt over Michael Chandler at UFC 262 earlier this year.

If Poirier wins the trilogy, his name will need to be in the books as one of the greatest UFC lightweights in the promotion’s history, especially if he’s able to earn the belt over Oliveira. If McGregor wins, his superstardom and career comeback will be fully realized as he attempts to get ready to earn a second reign as the lightweight champion.

Who do you think won the verbal warfare at UFC 264 pre-fight press conference?