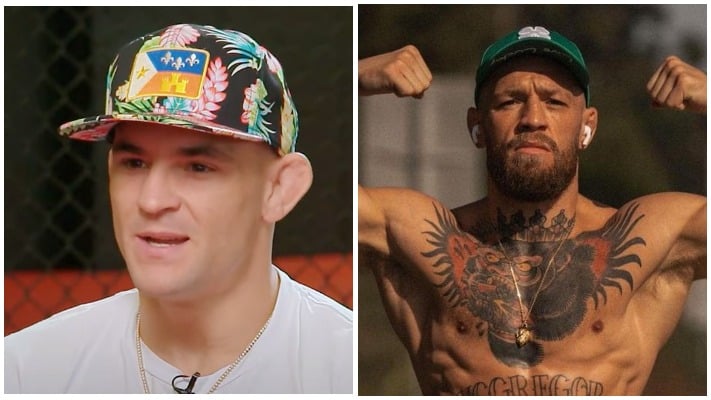 “””Mystic Mac” Conor McGregor may have met his match, as Dustin Poirier has a prediction of his own.

Poirier sat down with Michael Bisping ahead of his rematch with McGregor at UFC 264 on Saturday, July 10, 2021, at the T-Mobile Arena in Las Vegas, Nevada. During their interview, Poirier turned into the psychic, predicting how he anticipates the fight will end. (H/T MiddleEasy.com)

“I’m not sure if I’m gonna knock him out,” Poirier said. “It could be a stoppage by strikes, we’ll see. For some reason, I really have a feeling I’m going to submit him.”

The bold statement came at the end of an insightful interview with the Diamond. Poirier was candid about the challenges he’d previously experienced when dealing with McGregor’s infamous trash talking and what he believes it actually means now.

“Like, I said it talking to Brett [Okamoto], I feel [Conor’s] insecurity. You know, he’s worried the pressure’s on him. This is just another fight for me,” Poirier said. “Of course, it’s a big one. But [for] him, everything he’s built himself up to? You know, you go out there and get beat up twice by me, get stopped again, I mean, it’s not good. It’s not good for business.”

Insecurity is not good for business, and Poirier understands that he must deliver the performance of his career. But what happens if Poirier does the impossible and beats McGregor twice? Simple. Current lightweight champion Charles Oliveira will have the number one contender knocking at his door and we will likely see them fight before the end of the year.

Whether you’re a fan of Poirier or a fan of McGregor, one thing is for sure. The winner will be facing the current lightweight king next. But before a lightweight championship fight towards the end of the year, fans will get to enjoy fireworks between Poirier and McGregor in what will arguably be the biggest fight in 2021.

Do you think Dustin Poirier will be able to submit Conor McGregor at UFC 264?