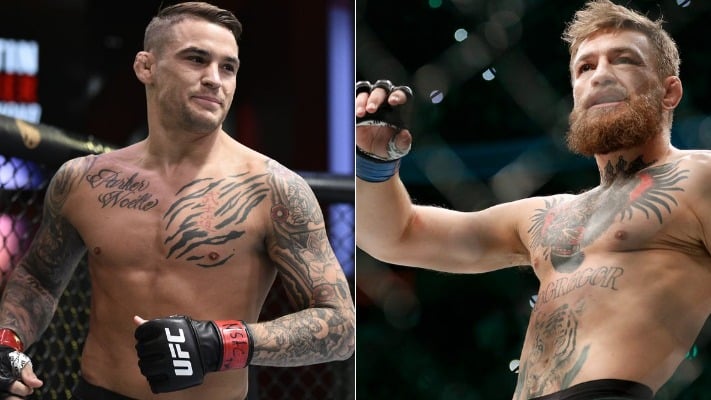 Dustin Poirier is more amused than offended at Conor McGregor taking shots at his marriage ahead of their fight.

Poirier and McGregor are set to meet for the third time in the main event of UFC 264 this Saturday. The fight is expected to be among the biggest in company history, as is made evident by the star-studded list of celebrities expected to be in attendance.

With an event, this size comes a comparable amount of press coverage, which – as with most of his fights – has largely revolved around McGregor’s antics.

McGregor had previously shared a screen grab of a DM request on Instagram from Poirier’s wife, Jolie. While there was no context given behind the message request or even a reveal of what was said, it’s nonetheless been something McGregor has brought up continuously to stoke the fires heading into the bout.

That continued on Thursday at the UFC 264 press conference, where Poirier and McGregor exchanged verbal blows for the better part of 20 minutes. At one point, McGregor even enticed the fans to start chanting “Jolie’s wife!” towards the former interim lightweight champion.

While having their marriage constantly brought up and mocked could get under the skin of some fighters, Poirier is brushing it off. In fact, in an interview with ESPN’s Brett Okamoto, he said he finds it ironic McGregor is bringing up his marriage given the accusations that have been cast the Irishman’s way.

“It made him less powerful because he’s talking silly stuff about my wife,” Poirier said. “She’s my husband or something? What the f— are you talking about? He shouldn’t even be talking about marriages with the s— he’s out there doing.”

It should be noted that while McGregor has been accused of acts of infidelity and sexual harassment, he has vehemently denied any wrongdoing and has never been proven guilty.

Many believe Poirier got the better of McGregor during the press conference, as he was able to stay cool during McGregor’s erratic behavior. Regardless, with two days left until the fight, there’s bound to still be trash talk between the two before they step into the octagon on Saturday. You can be sure their respective marriages will be front and center of it.

While we can argue about who’s gotten the better of who, there’s sure to be no doubt when the two finally meet in the cage for the last time. The winner will have a date with lightweight champion Charles Oliveira and bragging rights for life, while the other will be faced with some hard questions to answer.

Do you think the insults between Dustin Poirier and Conor McGregor towards their marriages have gone too far?