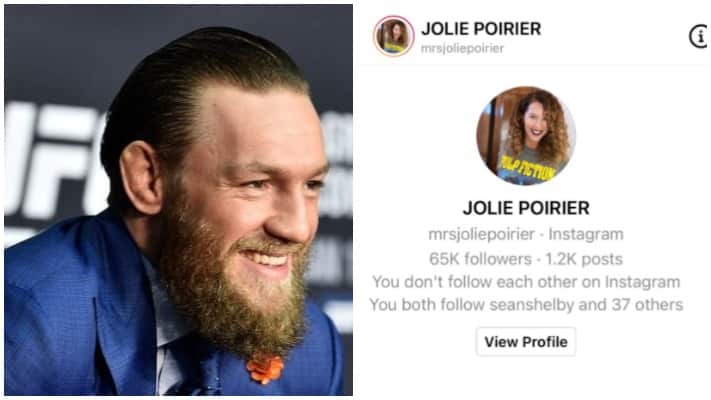 Conor McGregor has looked to provide proof that Jolie Poirier is sliding into DM’s days after he first took aim at Dustin Poirier’s wife.

During the UFC 264 pre-fight press conference, McGregor often mocked Poirier’s relationship by claiming. “Your wife is your husband.”

‘The Diamond’ appeared to make light of the dig when he posted a picture of him and his wife arriving at the UFC 264 pre-fight press conference.

“Me and the hubby walking into the press conference,” Poirier wrote on social media.

McGregor replied to the tweet with a screen recording that shows him going onto Instagram and proving that Poirier’s wife had tried to direct message him on the app.

On Tuesday, McGregor shared a screenshot from what appears to be his official Instagram account, however, the authenticity of the image was not verified – until now.

In the screengrab, ‘Notorious’ appears to have received a direct message request from Jolie Poirier, under the username mrsjoliepoirier.

Even if this DM request is real, it’s most likely an innocent bi-product of McGregor’s promise to donate to The Good Fight Foundation – a charity ran by the Poirier’s.

The donation never came and caused tension between McGregor and Poirier that reached boiling point at the UFC 264 pre-fight press conference.