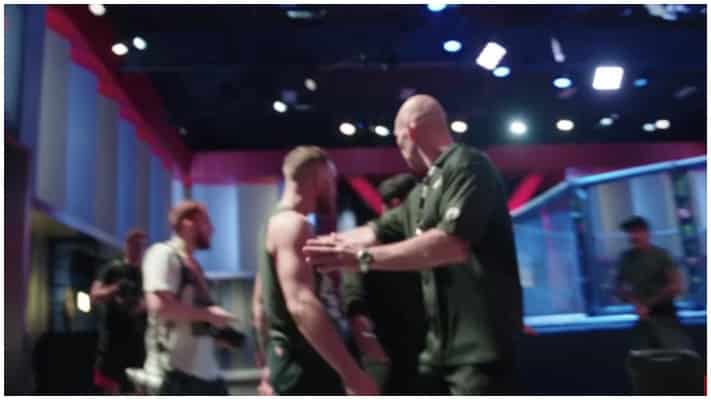 ‘Notorious’ is set to headline against Dustin Poirier after both men came in bang on the lightweight limit of 156lbs ahead of the eagerly anticipated trilogy fight.

Dos Anjos also made weight as a backup for the main event. Luckily for fight fans, it appears his services will not be needed.

McGregor and Poirier both look healthy and barring any fight day mishaps will square off in just a few hours’ time.

On Friday, Dos Anjos posted a message to McGregor on social media.

“Conor you’re such a snake, sneaking from behind and playing tough,” Dos Anjos wrote. “Soon or later we will finish business. I’m not like the guys you play around with.”

“There was a minor verbal altercation between McGregor and dos Anjos backstage at the UFC Apex during weigh-ins,” Raimondi wrote on social media. “That’s what this tweet is referencing.”

The “minor verbal altercation” was caught on camera and released as part of the UFC 264 Embedded series.

McGregor can be heard chastising Dos Anjos for withdrawing from their lightweight title fight in 2016. The Irishman ended up fighting late replacement opponent Nate Diaz and the rest is history.

Dos Anjos surrendered his title to Eddie Alvarez soon after. ‘The Underground King’ was eventually dethroned by McGregor who became the first man to hold two belts simultaneously when doing so at UFC 205.

Dos Anjos replies to McGregor’s aggressive behaviour by saying they can fight right now but security was on hand to guide ‘Mystic Mac’ away from the scene and avoid any type of physical altercation.

‘RDA’ returned to the division where he once held UFC gold in 2020 and looked fantastic when doing so while dominating the always tough Paul Felder over five rounds.

Do you still want to see Conor McGregor vs. Rafael Dos Anjos?