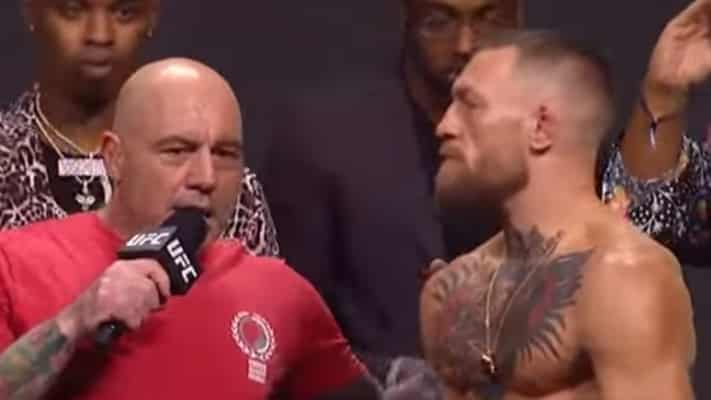 Conor McGregor and Dustin Poirier had a respectful, often cordial buildup to their last fight at UFC 257. But the pleasantries have worn thin ahead of their trilogy finale at UFC 264 in Las Vegas.

McGregor and Poirier faced off for the final time at the UFC 264 ceremonial weigh-in, in front of a jam-packed crowd at T-Mobile Arena. Both men weighed in at 156 pounds earlier in the morning when they hit the scales.

McGregor has bad intentions heading into this trilogy with Poirier, especially after the recent drama between the two on social media along with suffering a devastating knockout at UFC 257. UFC commentator and weigh-in MC Joe Rogan asked McGregor about his mindset heading into the fight and gave a blunt and dark answer when it came to how he felt about Poirier.

“In 16 hours’ time, this man is gonna learn,” McGregor said. “If you disrespect a person’s kindness, and take it as a weakness, you must pay. Tomorrow night I’m going to make this man pay with his life! You’re dead in that octagon tomorrow night!”

At the UFC 264 pre-fight press conference, McGregor and Poirier got into it on the mic and on the stage in front of a crowd of fans in attendance. The two traded barbs included wife jokes, ‘McGregor FAST’ mocking, and physical altercations before and near the end of the media availability.

The winner of the UFC 264 main event will more than likely be the next title challenger for lightweight champion Charles Oliveira‘s belt, barring some unforeseen circumstances. Poirier turned down a shot at the vacant lightweight title in favor of the trilogy bout with McGregor.

The tension between the two has been building for months since their last fight at UFC 257, stemming from an alleged botched donation by McGregor to Poirier’s foundation. McGregor and Poirier have traded multiple barbs on social media, including most recently McGregor taking shots at Poirier’s wife Jolie.

We’re in for quite the fight, ladies and gentlemen.

Do you think a more intense Conor McGregor will beat Dustin Poirier at UFC 264?