‘It Came As A Surprise’ 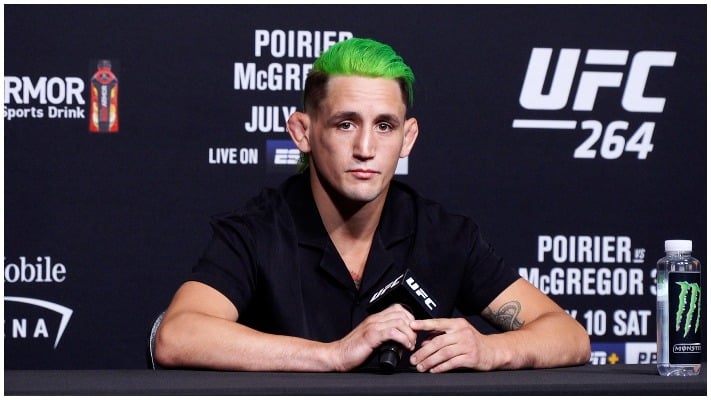 When new UFC Bantamweight Kris Moutinho makes his Octagon debut on Saturday night, he will be opening up a Conor McGregor pay-per-view against one of the best up-and-coming prospects in the sport in ‘Suga’ Sean O’Malley.

When it comes to Moutinho however, this came as a welcome surprise for him and his team in New England.

“It was a surprise to me, as well,” Moutinho told reporters at a UFC 264 media session at the UFC Apex. “I’m just as thrown for a loop as you guys, so it’s crazy. I love it. My coach, when the sweepstakes came out, the Sean O’Malley sweepstakes, he was like, ‘It’s a long shot man. You want to just throw your name in?’ And I was like, ‘Yeah, why not? Let’s do it.’ A couple of days went by. I wasn’t hearing anything. I was like, ‘It’s probably not going to happen.’

“He was like, ‘OK, you made it past the first round. They took your name. They’re going to look at it. Within 15 minutes, I was getting DMs from random people telling me that I’m going to get knocked out and get beat up and I was like, ‘Oh man, what are you guys talking about?’ Five minutes after that, he called me back and he was like, ‘Yeah man – we got it. Just get ready. Cut the weight’ and let’s go show the world who I am.”

Moutinho hasn’t had much time to prepare for O’Malley, but knows the opportunity in front of him is a potentially life-changing event and feels as if he’s prepared for this moment for some time now.

“He’s a very talented, explosive kid, but I just don’t think somebody’s been in there to test, to push him that way,” Moutinho said. “The only time he was kind of pushed was the (Marlon) ‘Chito’ (Vera) fight, and he got hurt. So he has a little fallback to why he was going to win that fight, but he got hurt. I think I’m just going to stay in his face, put the pressure, and I think that’s something that he’s not comfortable with.

“I’ve been putting on great fights my entire career, and I’ve fought some of the best talent outside the UFC and some of them are in the UFC now. I fought Manny Bermudez when he was in the UFC in my amateur career and then I fought Tony Gravely not too long ago in a crazy fight. So I’ve been fighting some of the better dudes in the country for a very long time.” (Transcribed by MMA Junkie)

It’s hard to deny O’Malley as the big favorite going in, but it certainly cannot be understated that Moutinho has put in the work and will be ready for the challenge.

How do you feel about Kris Moutinho going into this fight? Should Sean O’Malley have gotten a fighter on the roster?