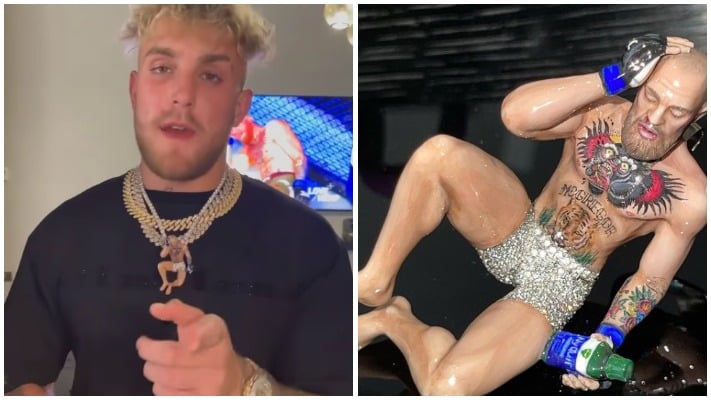 3-0 professional boxer, Jake Paul has had a custom necklace of Conor McGregor following UFC 257 in January — worth up to 0,000 made by a jeweler, ahead of the Dubliner’s UFC 264 return tonight against rival, Dustin Poirier.

Paul, who is scheduled to meet with former undisputed UFC welterweight champion, Tyron Woodley in August under the Showtime banner in a professional boxing match, claimed earlier this week that he had instructed a jeweler to make a custom made necklace, featuring an image of McGregor following the Crumlin native’s second-round knockout loss to Poirier earlier this year on ‘Fight Island’ in Abu Dhabi, UAE.

“I had my jeweler custom make me a $100,000 dollar diamond necklace of this frame, reveal tomorrow,” Paul posted on Twitter earlier this week.

Today, ahead of McGregor’s Octagon walk tonight, Paul revealed the necklace on his official Twitter account in a video posted; “New $100k Sleepy (Conor) McGregor Chain.” The chain features an image of McGregor following the January knockout loss — holding a bottle of Nyquil in his left hand.

Ohio-born YouTube content creator, Paul has been vocal over the last 18-months in his bid to score an eventual professional boxing match against former undisputed lightweight and featherweight champion, McGregor.

The polarizing, Paul has competed three times professionally in the squared circle — scoring a trio of first round knockout wins against fellow YouTuber, AnEsonGib, as well as former NBA player, Nate Robinson.
In his most recent win, Paul met with former ONE Championship and Bellator welterweight and UFC alum, Ben Askren in a Triller Fight Club promoted boxing match in April — stopping the Iowa native with a one-punch knockout.

Over the last week, Paul hit headlines in the mixed martial arts community after he pledged $5,000 to the GoFundMe campaign of UFC flyweight prospect, Sarah Alpar — who had organized the campaign in a bid to fund her fight camp for a UFC 266 bout with Erin Blanchfield.

The aforenoted, Triller Fight Club claimed responsibility for a $25,000 donation earlier last week — as Alpar exceeded her campaign goal of $30,000 before December 1. this year.