Well that was just f***ing horrible in the end, wasn’t it?

From the pinch-yourself start to the all-too familiar yet extra gut-punchy finish, England’s players did some football in the country’s biggest game for 55 years so I suppose we’d best go through it. Sake.

JORDAN PICKFORD
Of all the England players who Didn’t Deserve That, arguably none Didn’t Deserve That more than Pickford. A couple more huge saves to add to his collection from this tournament. Desperately unlucky with Italy’s goal after making such a great initial save and then kept out two penalties in the shootout. The save to deny penalty maestro Jorginho in particular was magnificent. Even if it only made everything somehow feel far, far worse in the end. 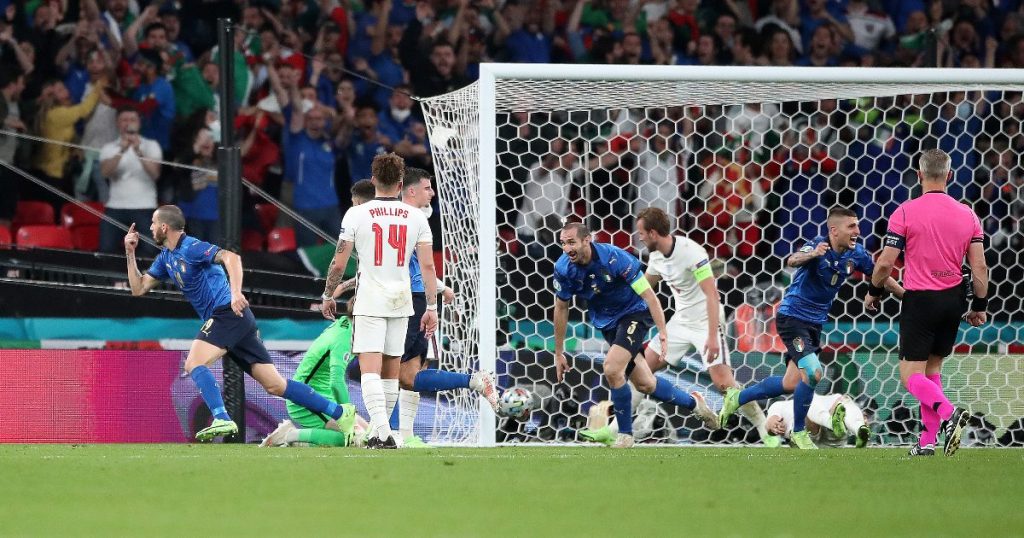 KYLE WALKER
An absolute Vinny Samways of a run in the build-up to the opening goal, Trippier using him by not using him before picking out Shaw at the back post. More than once that safety net provided by his pace and apparent ability to turn it on, at will, at any point from minute one to 120 was crucial to England. As was, as ever, his ability to calmly chest the ball back to his keeper at points when absolutely nobody else would think it in any prudent to do so.

JOHN STONES
Held a good line for a couple of first-half offsides and made a crucial block in added time before half-time. Unfortunate with the equaliser but was superb once again. A brilliant tournament.

HARRY MAGUIRE
Gave away what appeared to be a careless, nervy corner in the opening 70 seconds. Turns out it was a masterstroke. Headed the corner clear himself to initiate the Sterling-Shaw-Kane-Trippier-Shaw-again lightning break that gave England that scarcely-believable second-minute lead. Also gave away the corner from which Italy equalised, but you can’t have everything and he had very little option that time. Overall, another immense display and he gave us the last unequivocal feelgood moment of the tournament (Pickford’s save from Jorginho serving in the end only to set up the Saka distress) when his quite magnificently on-brand thriker of a penalty took out the camera in the top corner of the goal.

KIERAN TRIPPIER
Wonderful cross for the opening goal. Even in a tournament of Things Going Right For Gareth Southgate, his decision to opt for a back three and wing-backs leading to one assisting the other inside the first two minutes of a final felt a bit bloody much, really. Has any tactical gambit ever before paid off so quickly in so big a game? Found so much space in those carefree opening 25 minutes when all was right with the world, but as his influence waned so Italy’s grew as he was first shackled and eventually forced right back into a defensive five. Made way for Saka when England changed formation on 70 minutes; reacting to the equaliser rather than doing something in the increasingly fraught 15 minutes of sirens and warning lights blaring before it might just be the “what if?” that most haunts Southgate. The penalty specialist ruse didn’t pay off (and how) but at least you could see the logic. England were crying out for a change from very, very early in that second half.

KALVIN PHILLIPS
Precisely the performance we’ve now come to expect from Phillips. One of the standout midfielders of the tournament was brilliant again, covering every blade of Wembley grass, most of them twice, and never giving Italy a moment’s peace. Four tackles, an interception, a couple of clearances. Not quite as secure in possession as he might have liked, but that owed much to the wider problems England encountered after the first half-hour.

DECLAN RICE
Has been a consistently excellent but largely understated element of England’s historic run to this final, but here he really caught the eye with a series of surging runs and tackles – six of the big crunchy bastards in just 73 minutes on the pitch. Was probably still England’s best player when he was withdrawn and while England were losing the midfield battle by that stage you wonder whether replacing Rice was the right solution. Only real blemish came in the first half when Chiesa got away from him and flashed a shot just wide, but really that said far more about how good Chiesa is than anything else.

LUKE SHAW
Handy start, making two crucial and high-class contributions to that opening goal which now feels like it happened approximately 253 years ago. His story was that of so many of England’s players on the night: so, so good for the first 30 minutes, clinging on for dear life for the rest of it. 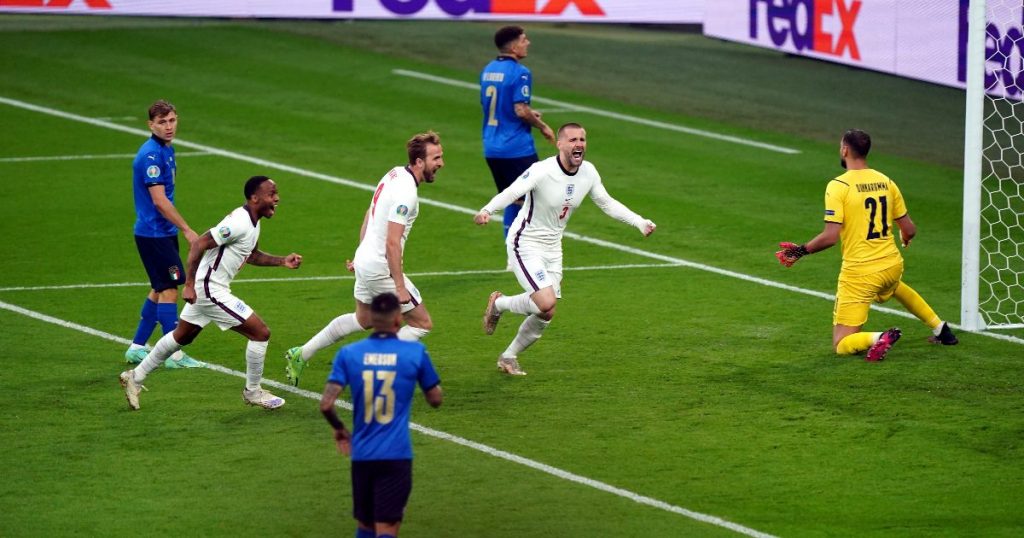 MASON MOUNT
Very, very good in the first half but struggled to get involved at all after the break. Could have been replaced by Grealish a good 40 minutes earlier than he was, let’s be honest. Set-piece delivery quite infuriatingly patchy again given its potential importance to this England side.

RAHEEM STERLING
England’s player of the tournament’s quietest game came in the final. Football is not a game that can be entirely summed up by one simple stat (unless it’s The Only Statistic That Matters, found in the top left-hand corner of your screens, of course) but Sterling making 10 dribbles against Denmark and just two against Italy feels like it might be pretty close. It’s just a real shame it had to end this way, but you can say that about a lot of England players I suppose. Ultimately, like Kane, just superbly well shackled by Bonucci and Chiellini on the night.

HARRY KANE
The game’s most influential force in the opening half-hour and once again dropped deep to devastating effect in the creation of England’s goal. Some genuinely elite close control and hold-up play both deep and on the shoulder of the defenders. Got through a ton of work, but the cold, hard facts are that Sterling and Kane, who had scored seven goals between them in the tournament, didn’t have a single shot between them in the final. Italy thoroughly Italied them. Shootout penalty a significant upgrade on his Denmark one.

BUKAYO SAKA (for Trippier, 70)
A frustrating 50 minutes on the field in which the 19-year-old tried gamely to turn the tide of a game that was heading decisively away from England by the time he was introduced. It just never quite happened for him, and then came that final, decisive penalty. Whatever the data, whatever the cold hard logic that England’s brains trust came up with, having a situation where a 19-year-old’s first senior penalty is the fifth and final one to keep the Euros final alive feels like a bit of an error.

JORDAN HENDERSON (for Rice, 73)
Another subbed sub, ostensibly to get a penalty taker on the field but it could just as easily have been a genuine decision, really. He really was pretty rotten, offering none of the calmness or control you might have expected. From demanding a penalty in a pre-tournament friendly to being subbed to avoid taking one in the final. Harshly reductive, but it’s quite something.

JACK GREALISH (for Mount, 99)
Could have happened in normal time. Could have happened before the equaliser when the direction of travel in the game was already painfully obvious and England needed to do something to shift the game’s course. Grealish wasn’t brilliant by any means, but he did give Italy headaches and occupy them. Easy to say after the event, but England could really have done with some of that far earlier.

JADON SANCHO (for Walker, 120)
The penalties really were missed by the very worst possible people to miss them for so many reasons. England managers in the past have been criticised for failing to use the last couple of subs to get the penalty specialists on the pitch, so it’d be wrong to aim too many brickbats at Southgate and his strategy here: if Jorginho can miss then anyone can. But it must also be a very strange situation for a player to find themselves in when they’ve had no chance to get into the game or their surroundings. It’s offered more as observation than criticism, but being brought on in the very final minute for one very obvious and specific task must make the almost unimaginable pressure of that task even more daunting. Both Rashford and Sancho really did take pretty horrible penalties and tonight they really did only have one job.