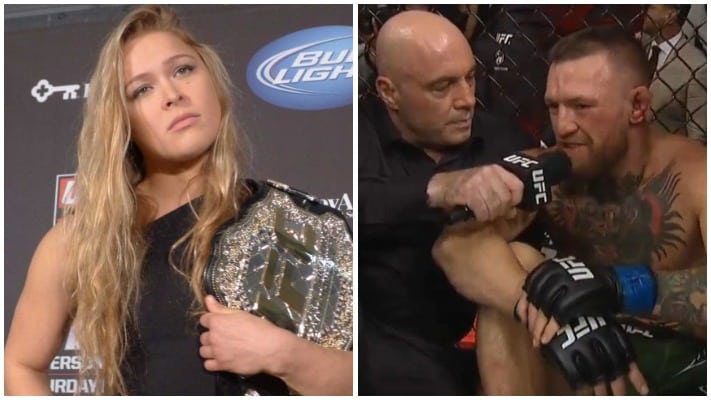 Ronda Rousey was impressed by Conor McGregor’s ability to immediately begin talking up a fourth fight with Dustin Poirier after breaking his fibia against ‘The Diamond’ at UFC 264.

The UFC 264 main event started well for McGregor who enjoyed some success on the feet before Poirier began to take over in round one. ‘The Diamond’ capitalized on a failed submission attempt and spent the majority of the first frame landing nasty ground strikes.

Both men returned to the feet with a few seconds left in the round. ‘Notorious’ missed a punch and fell back awkwardly, suffering a break in the process.

The unfortunate injury brought a premature end to the eagerly anticipated trilogy fight.

As Poirier gave his post-fight interview McGregor continued to trash talk before getting his chance on the mic.

The Irishman then offered his assessment of the fight and also made more uncalled remarks about Poirier’s wife.

“I was boxing the bleeding hell off him,” McGregor told Joe Rogan. Kicking the bleeding leg off him. … This is not over. If we have to take this outside for him, it’s all outside. I don’t give a bollocks.”

“There was no check,” McGregor added. “There was not one of them that was checked. Your wife is in my DMs, hey baby, hit me back up, I’ll chat with you later on. I’ll be at the afterparty. You little ho, fuck him.”

Many have condemned McGregor for his post-fight antics but former bantamweight champion, Ronda Rousey, was impressed by the Irishman’s ability to promote the fourth fight despite being in such a tough spot.

“I’m amazed that as soon as you hit the ground you were already promoting the next fight @TheNotoriousMMA- I def wouldn’t have had the mind to do that,” Rousey wrote on social media. “The other fighters, @ufc and media are lucky to have you.”

“Thank you for the message Ronda! I appreciate it greatly,” McGregor replied.

Do you agree with Ronda Rousey? Did Conor McGregor impress you with his ability to promote another fight with Dustin Poirier despite being injured at UFC 264?