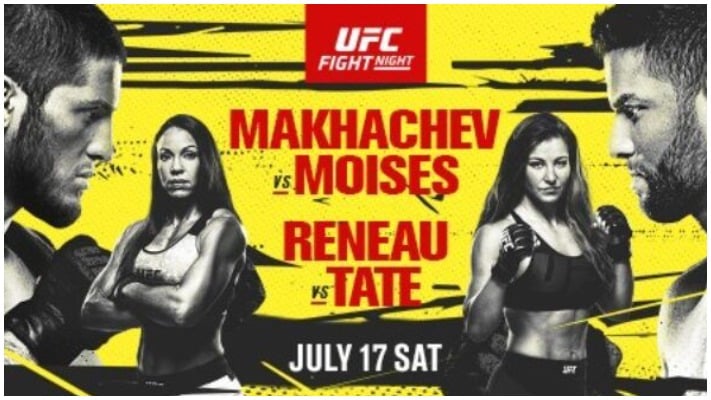 UFC Vegas 31 takes place this weekend behind closed doors at the APEX in Las Vegas, Nevada. In the main event, we have an exciting match-up between the latest star to emerge from Dagestan, Islam Makhachev, and Thiago Moises. The lightweight duo was elevated to the top of the card after Max Holloway vs. Yair Rodriguez fell apart. The UFC Vegas 31 undercard is stacked and promises to deliver plenty of big moments.

Join LowKickMMA as we preview, predict, and hopefully win some money betting on the UFC Vegas 31 main event and a selection of its undercard fights. If you will be putting some money on the fights this coming weekend be sure to check out the best betting sites for MMA to ensure you always get the best odds.

The UFC Vegas 31 main event is something of a mismatch according to the oddsmakers. You’ll have to bet really big to see any type of worthwhile return on the -600 favourite Islam Makhachev. The heir to Khabib Nurmagomedov’s throne is one of the brightest prospects in MMA. Many had expected him to be fighting an upper-echelon guy at this event but for one reason or another he ends up squaring off against the #14 ranked Thiago Moises. The +450 underdog can’t totally be written off in this fight after putting a three-fight win streak together. Ultimately, we just can’t bet against Makhachev. We think he’ll eventually force a stoppage and will be backing him to do so.

It’s great to see MMA legend Miesha Tate back to what she does best. The former Strikeforce and UFC champion has been out the game for five years but that hasn’t stopped the bookmakers making her the favourite against Marion Reneau. ‘Cupcake’ is -138 to get the win in her return. We’ll be backing her to do so. If she can’t get by her 44-year-old opponent, we don’t expect Tate will remain in MMA for more than one fight. If you fancy Reneau to spring the upset she’s priced at +110.

Jeremy Stephens’ long overdue return to lightweight is finally upon us. The former featherweight contender is on a bad losing streak but has only fallen short against the best 145lb fighters in the UFC. He’ll enter his fight against Mateusz Gamrot as the +188 underdog. Gamrot is 1-1 in the UFC but has enjoyed great success outside of MMA’s premier promotion. The Polish fighter can consider himself unlucky to have been on the wrong side of a judges’ decision in his UFC debut. After taking things out of the judges’ hands last time out he’s bagged himself a big name. We are backing Gamrot to make good on his favourite tag and pick up a win at odds of -225.

Daniel Rodriguez has looked brilliant lately and has picked up big wins over the likes of Mike Perry, Dwight Grant and Tim Means. He was due to face Abubakar Nurmagomedov before injury brought an end to that match-up. In steps Preston Parson for his UFC debut on short notice. For this reason, Rodriguez is a big favourite at -250. Parson is the -200 underdog and rightly so but will fancy his chances against Rodriguez who is never scared of a brawl. Ultimately, we’ll be backing ‘D-Rod’ to continue his run of fine form.

Who will you betting on at UFC Vegas 31?