‘I Break My Ankle All The Time’ 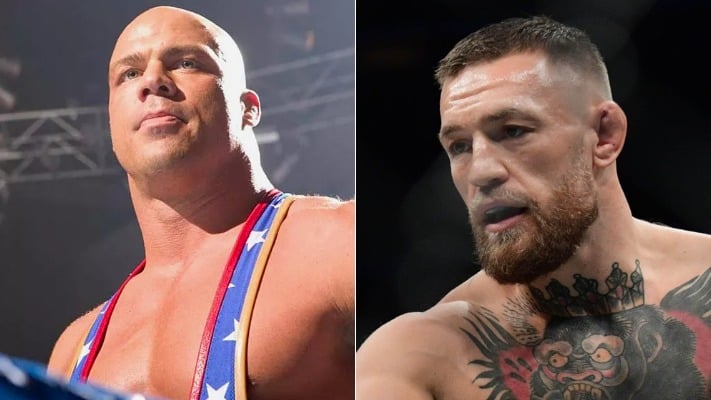 Professional wrestling legend Kurt Angle, like many around the world this weekend, tuned in to the UFC 264 trilogy between Conor McGregor and Dustin Poirier. The main event ended in an unusual fashion after McGregor shattered his left leg and had to be carted off from the octagon on a stretcher.

Regardless of McGregor’s freak injury, Angle doesn’t put much stock in it and thinks the moment was a little overrated; saying that he’s suffered the same injury on multiple occasions over the course of his career and life.

“So…. [Conor McGregor] broke his freakin’ ankle this past weekend. Big deal,” Angle tweeted. “I break my ankle all of the time. I broke my ankle this morning and I’m jumping around right now!! I even won a gold medal with a broken freakin’ neck too.”

Angle earned an Olympic gold medal in freestyle wrestling back at the 1996 Summer Olympics in Atlanta before enjoying a long-tenured career in professional wrestling. He is mostly known for his time in WWE/WWF from 1998-2006, before wrestling for other promotions and then returning to WWE back in 2017.

McGregor successfully underwent surgery on a fractured lower tibia directly following UFC 264 at a Las Vegas hospital and is expected to be sidelined for at least the next six weeks. Poirier will be the next title challenger to UFC lightweight champion Charles Oliveira’s belt later this year.

McGregor suffered the injury in the closing seconds of the opening round in his fight with Poirier, after getting hit by an elbow that countered a left high kick. His leg gruesomely collapsed from underneath him and the fight was called due to a doctor’s stoppage, giving Poirier the win.

McGregor faces a six-month medical suspension from the UFC for his injury and surgery. If there will be another fight between McGregor and Poirier, it sounds like it won’t happen again until 2022.

What was your reaction to McGregor’s gruesome leg injury at UFC 264?