He Deserves A Standing Ovation 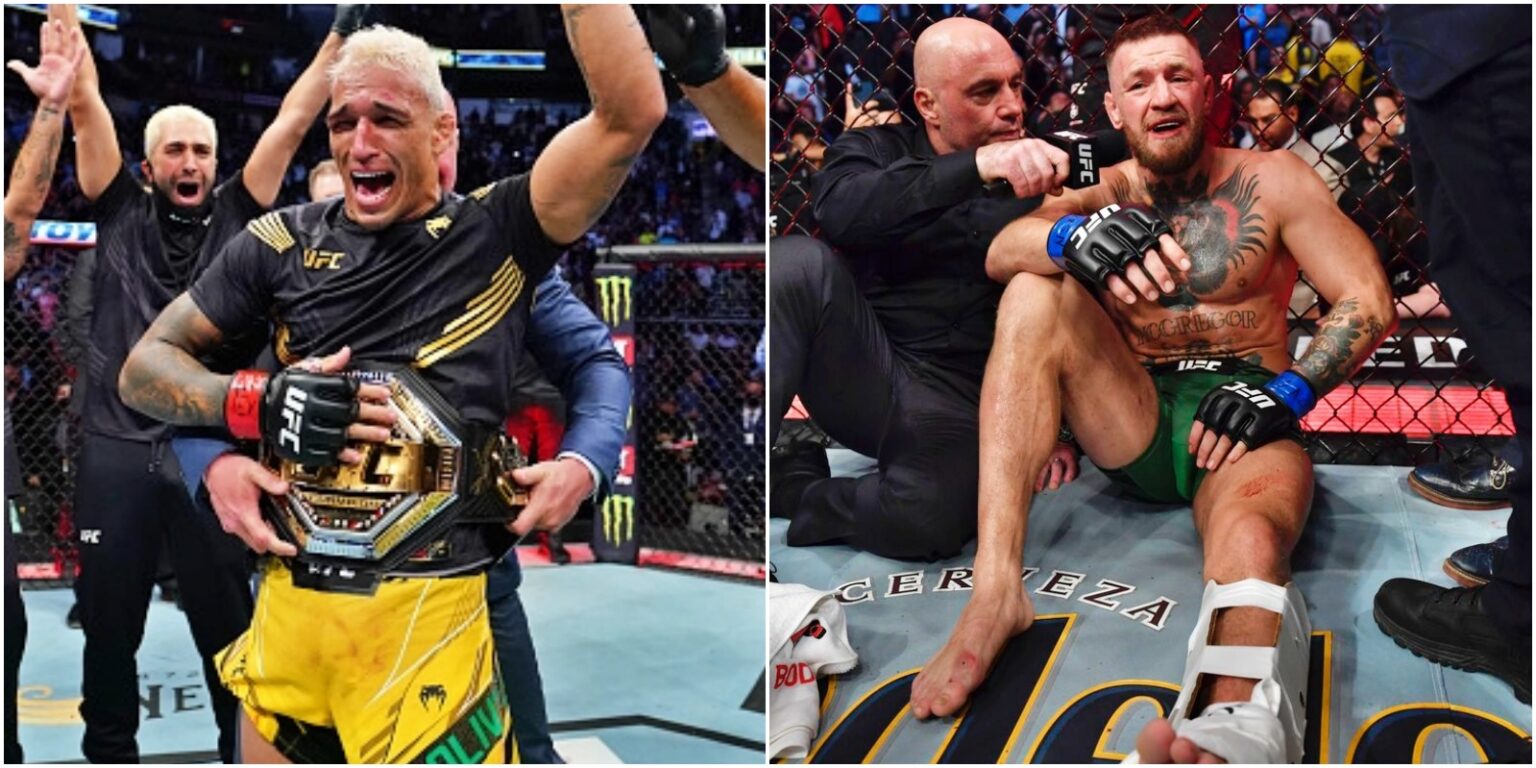 Undisputed UFC lightweight gold holder, Charles Oliveria has reflected on former two-weight champion, Conor McGregor’s UFC 264 trilogy bout loss to Dustin Poirier last weekend — claiming that although he’s not a fan of the Dubliner’s pre-fight promotion and antics, he believes he deserves a “standing ovation” for his achievements as a mixed martial artist.

Oliveira, who lifted the vacant lightweight championship in the main event of UFC 262 back in May — rallied from some opening round adversity against Michael Chandler, to stop the former three-time Bellator lightweight best in the second round with a quickfire knockout to extend his winning spree to eight fights.

In attendance at the T-Mobile Arena in Las Vegas, Nevada — Sao Paulo submission ace, Oliveira watched on as Poirier clashed with McGregor — with the victor slated to meet him in his first attempted defence of the lightweight crown.

Recently turned 33-year-old McGregor, suffered a first round doctor’s stoppage defeat to Poirier at the pay-per-view showcase, after he suffered fractures to both his left tibia and fibula, marking his second consecutive loss to Lafayette native, Poirier, following a second round knockout loss to the former interim champion on ‘Fight Island’ in January.

Giving his thoughts on McGregor’s loss and injury, Oliveira explained how while he doesn’t support the Dubliner’s pre-fight trash talk, promotion, or antics, he claimed that the former undisputed lightweight and featherweight champion deserves a “standing ovation” for the achievements he’s managed in the sport.

“It’s boring to talk about this fight,” Oliveira said during an interview with Super Lutas. “I, Charles (Oliveira), see all fighters as workers who were born to do this. So, I treat everyone well, when the fight is over I hug, kiss, thank you for the affection and the opportunity. I watch the UFC (UFC 264 event) from the beginning to (the) end. And, the way Conor (McGregor) lost, it was painful. If he got knocked out or knocked out Dustin (Poirier), it would be a show. But the shape, the way it was, was painful.“

“Conor deserves a standing ovation,” Oliveira continued. “I don’t like the way he sells the fight, the way he talks. But as an athlete, he’s a giant guy. The guy moves millions of people and earns millions of dollars — to win or lose. He’s a guy who puts money in a lot of people’s pockets. Everyone wants to fight him because he knows he’s going to make money. Unfortunately, it lose the way it was and will stay put. He spoke of six weeks to return. I’m sure when he comes back he’ll fight Dustin Poirier again. He has my respect.“

While Poirier picked up a 10-8 round following an extended period of ground control against McGregor following a failed guillotine attempt from the Dubliner, Oliveira claimed that it wasn’t a foregone conclusion that Poirier would go on to stop the former champion in the second round.

“I heard a lot people saying that he deserved to lose, the way he sells the fight, but I don’t agree,” Oliveira said. “I get upset about it. People love the way the guy sells, but when he loses, he gets criticized. Dustin — once again — came strong, up and making it happen. He had a good first round, had a hard ground-and-pound against Conor, but we’re talking about MMA. We can never say that Dustin would win in the second round, nothing was decided. It’s unpredictable. But Dustin is to be congratulated. It shows how much he is evolving, he has a good mind and deserves all the respect in the world for the person he is.“