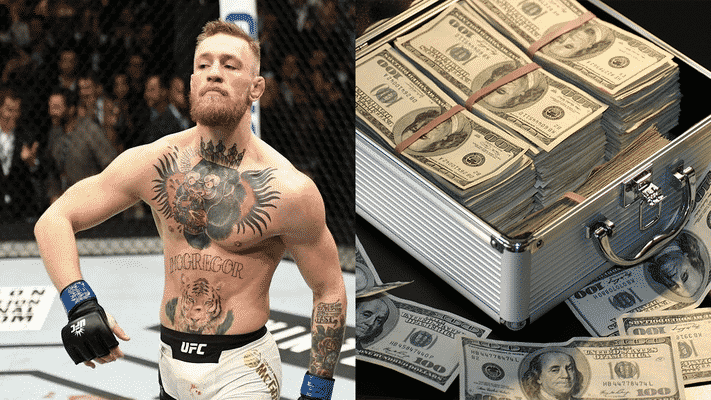 Last weekend, many UFC fans all around the world gathered together to watch one of the most anticipated cards of the year in UFC 264: Dustin Poirier vs. Conor McGregor III. v

This was the second time McGregor has competed in the UFC in the same year since 2016.

McGregor and Poirier were able to go toe-to-toe for the majority of the first round with both competitors walking away with highlights to share. While it can be argued going by the judge’s score card that Poirier had won the first round 10-8, it is hard to see exactly where the fight would have gone had it have went beyond the first round.

The fight had instead been stopped prematurely with a doctor’s stoppage due to McGregor breaking part of his lower leg in the last 10 seconds on the first round.

While McGregor was unable to finish the fight and put the American to sleep, he still remained a winner pocketing a massive paycheck of $23,011,000 which included a huge $18 million pay-per-view bonus! – ( H/T MMA SALARIES)

Before the fight it was anticipated that McGregor would receive a guaranteed $5,000,000 pay day however due to the success of the PPV sales, McGregor’s payslip instead rose to $23 million due to the event’s huge success.

UFC President Dana White shared in a post-fight press conference that the event actually sold over 1.8 million PPV worldwide which made it the second-highest selling card in the companies history.

The proof is in the pudding and it’s hard to deny the fact that McGregor, much like Nate Diaz, win, draw or lose, is still a huge draw for the promotion.

As for Poirier, it is reported that he earned only a fraction of what McGregor received, pocketing an approximate $5,121,000 which also included a $3,600,000 PPV bonus.

With the fight ending anticlimactically, it is known that many fans around the world as well as McGregor and Dana White are unhappy with the fashion in which the fight stopped.

In the UFC 264 post-fight conference, White insisted that he would like to see the fight again with a fourth clash to be announced in the future following McGregor’s surgery and successful recovery.

McGregor, has since remained positive, taking to Instagram following his leg surgery to announce that he is not only feeling ‘tremendous’ but also that “We’ve got six weeks on a crutch now and then we begin to build back.”

“Dustin, you can celebrate that illegitimate win all you want, but you’ve done nothing in there. The second round would have shown all.”

Would you like to see Dustin Poirier vs. Conor McGregor 4?