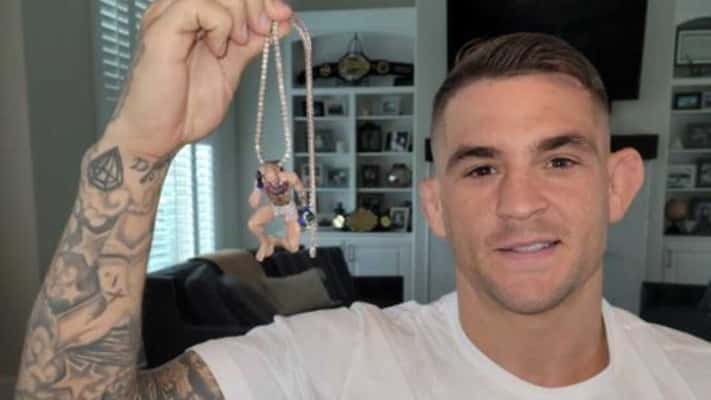 As promised, Dustin Poirier has received the infamous ‘Sleepy McGregor’ chain from YouTuber and Boxer Jake Paul, in his hometown of Lafayette, Louisiana.

But Poirier doesn’t plan on keeping the chain, and plans on auctioning it to one lucky fan and use the proceeds to help support his foundation “The Good Fight” to help those in his area make it through economic struggles and various other challenges.

The chain has an estimated value of over $100,000 with white gold and diamonds on it, and it’s sure to auction off for a lot of money assuming Poirier follows through. His foundation provides a platform for fans and athletes to fight and help underserved communities around the world and those who are in need of a wide variety of assistance.

Poirier recently paired up with boxer Manny Pacquiao to create housing initiatives in Uganda, along with former UFC fighter Justin Wren. Poirier also had a young man from Lafayette attend UFC 264 in Las Vegas will all expenses paid by “The Diamond” himself.

Poirier posted on his Instagram to announce his intentions for the chain and his foundation.

“Got the sleepy mac chain today from [Jake Paul],” Poirier said. “I will be auctioning it off soon for [The Good Fight Foundation] to do something big for Lafayette!!”

Poirier’s stock in and out of the octagon has risen quickly ever since he made the move to lightweight from featherweight in the UFC back in 2015. He immediately put a string of wins together including victories over former titleholder Eddie Alvarez, as well as former interim champion Justin Gaethje.

After his doctor’s stoppage win over Conor McGregor, UFC president has confirmed that Poirier will be lightweight champion Charles Oliveira’s first title defense later this year. This will be Poirier’s second shot at the lightweight title after falling to Khabib Nurmagomedov at UFC 242.

What are your thoughts on Dustin Poirier and his recent collaboration with Jake Paul?