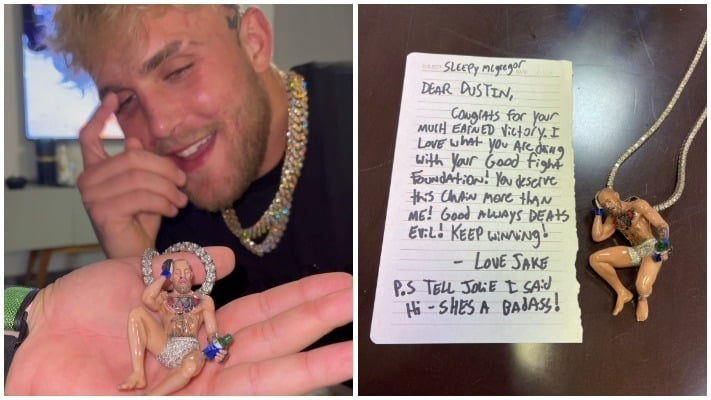 Jake Paul has kept his word and has sent his infamous ‘Sleepy McGregor’ chain to Dustin Poirier following his win at UFC 264 last weekend in Las Vegas.

Paul has taken repeated shots at McGregor following his devastating loss to Poirier at UFC 264 due to a doctor’s stoppage stemming from his brutal left leg injury suffered towards the end of the opening round of the bout. During his recent pre-fight press conference with his upcoming boxing opponent, Tyron Woodley, Paul hinted at his intentions to send his ‘Sleepy McGregor’ chain to Poirier for earning the win.

Fans and critics of Paul were unsure as to whether or not he was seriously considering sending the chain to Poirier for his efforts; but in a recent tweet, Paul showed that he was completely serious about the gesture.

“Congrats for your much-earned victory!” Paul said in a letter to Poirier shown on his Twitter page. “I love what you are doing with your Good Fight Foundation! You deserve this chain more than me! Good always beats evil! Keep winning!”

The social media world has had a fair share of laughs at McGregor’s expense, and this seems to be the latest addition to the conflict. McGregor suffered a fractured tibia in his fight against Poirier and underwent surgery at a Las Vegas hospital directly following the event.

Paul has long wanted a fight with McGregor in the boxing ring, but those plans are on hold as he gets ready to face Woodley in his next challenge next month. Paul went as far as saying that he would only offer McGregor $23.00 to fight him following his UFC 264 defeat.

The gift is also not a cheaply made one. It is valued at just over $100,000 and includes 500 grams of white gold with multiple diamonds included in the chain.

What are your thoughts on Jake Paul’s recent troll job of Conor McGregor?