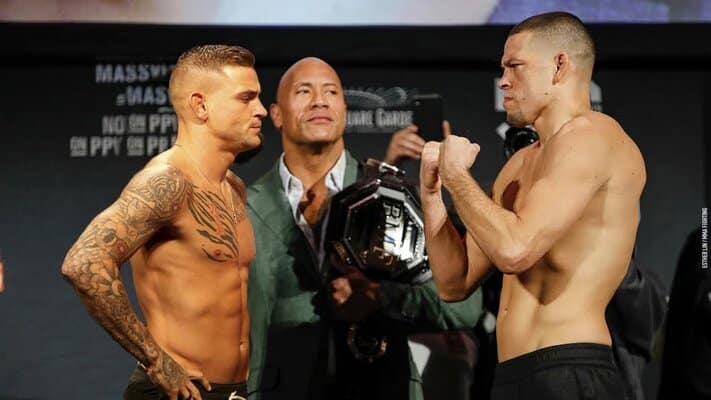 Dustin Poirier’s next match-up may not necessarily be for the belt with middleweight Nate Diaz proposing a bout at 185.

Poirier who is now 28-6 came out victorious in his trilogy match-up with the ‘Notorious’ McGregor last Saturday at UFC 264 event. It had been touted that Poirier’s next fight would indeed be for the lightweight belt where he would be facing the newly crowned champion Charles Oliveira. This bout was expected to be scheduled for the end of 2021.

However, with that in mind, Nate Diaz took to Twitter in an attempt to call out the number one contender.

Diaz (20-13) is coming off a decision loss to welterweight Leon Edwards. Though the result didn’t go Diaz’s way, the Stockton-raised fighter was close to shocking the world when he was ‘Rocky’ Edwards wobbled in the last minute of the fight. Unfortunately, Diaz was unable to capitalize on Edwards immobility ultimately leading to the decision loss. The fight instead was a war that went the full distance, impressing fans and athletes alike.

Diaz has since tweeted a photo of him and Poirier’s face-off from the previously slated UFC 244 bout scheduled between the two, the photo followed the caption “185lbs. Pull-up.”

Poirier was quick to reply responding with a tweet that read “I’d touch you up at any weight”.

Dustin Poirier and Nate Diaz were originally set to fight one another at UFC 230 in 2018 however the bout fell through and never came to fruition due to external circumstances. Diaz instead went on to face Anthony Pettis, Masvidal, and Leon Edwards, winning just one out of the three bouts in a decision victory over former UFC competitor Anthony Pettis.

Poirier on the other hand went on to become the intern lightweight champion and compete for the lightweight title in which he fell short in his match-up against the undefeated Khabib Nurmagomedov. Poirier however is riding a three-fight win streak having won a total of 8 out of his last 9 fights.

It is hard to argue against the fact that Poirier’s next fight should indeed be for the lightweight title, however, would a match-up between ‘The Diamond’ and Nate Diaz be one you would like to see at 185?