Goran Ivanisevic was not just struggling leading into Wimbledon in 2001, he was floundering. Even his peers noticed, including former World No. 1 Patrick Rafter.

“You came from nowhere leading up to that tournament,” Rafter said in a message to Ivanisevic. “You were really bad, actually. I saw you play in Rosmalen the week before. You were not good.”

The three-time Wimbledon finalist’s dreams of triumphing at The Championships were shrinking exponentially. A shoulder injury hindered the Croatian, and he started his 2001 grass-court season at The Queen’s Club by losing against World No. 194 Cristiano Caratti. The lefty then fell in the second round at ‘s-Hertogenbosch against Lleyton Hewitt.

But after a magical fortnight at the All England Club, Ivanisevic went from floundering to soaring. The World No. 125 became the first wild card to win a Grand Slam men’s singles title. Twenty years later, he is being inducted into the International Tennis Hall of Fame.

“I felt huge relief [come] from your shoulders. Like three-million kilos went off,” said Marat Safin, his quarter-final opponent. 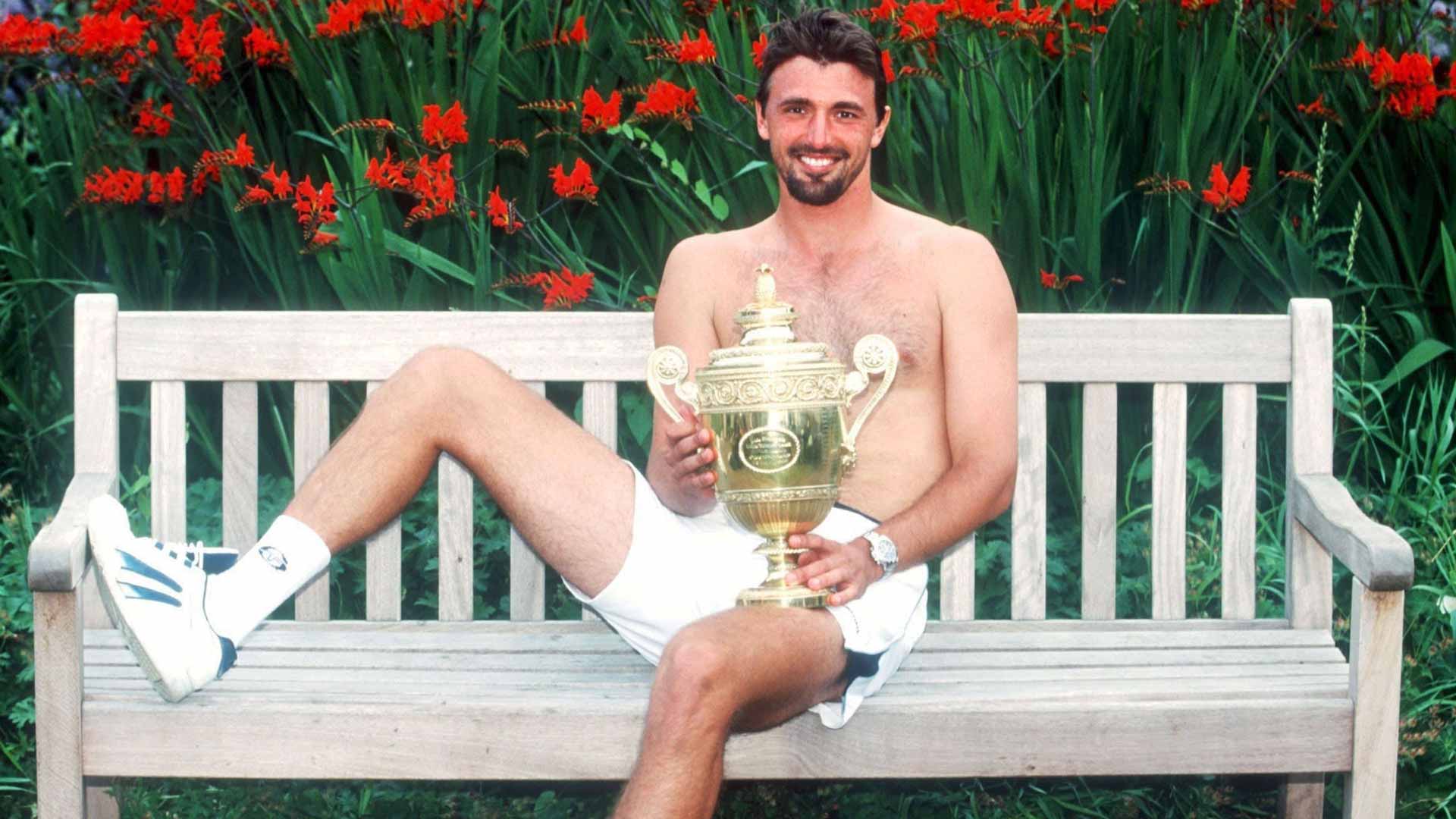 Goran Ivanisevic” />
Photo Credit: Bongarts/Getty Images
Ivanisevic faced one of the most daunting paths to a Grand Slam title in history, with four current or future World No. 1s and two more former top five stars in his way. And yet the Croatian legend summoned the physical strength and mental fortitude for a memorable ride at the All England Club.

From the first round through the final, Ivanisevic beat Sweden’s Fredrik Jonsson, Carlos Moya, Andy Roddick, Greg Rusedski, Safin, Tim Henman and Patrick Rafter. According to Moya, a former World No. 1 and 1998 Roland Garros champion, the lefty’s effort at SW19 20 years ago was special.

“Goran’s run at Wimbledon in 2001 was amazing, not because he beat me. It was probably his easiest match,” Moya admitted. “But also beating Rusedski, Roddick, Safin, Henman and Rafter in the final was probably one of the toughest draws ever to win a Slam since day one. I think he really deserved to win.”

The journey started with a 6-4, 6-4, 6-4 victory against Jonsson. Next in line was Moya, who had won their first three ATP Head2Head meetings in straight sets.

“I won the first set and I think I had break points to go up a break up in the second and I lost that,” Moya said. “If I didn’t beat you that day on grass I would never do that, so I was quite disappointed in losing that match.”

Hall Of Fame Awaits, But Which Goran Will Be Inducted?

Ivanisevic rallied for a 6-7(6), 6-3, 6-4, 6-4 win, his lone triumph against the Spaniard. The wild card had a stiff — but different — test in the third round against future World No. 1 Andy Roddick, who at the time was a big-serving, forehand-smacking star on the rise.

“All I kept hearing was that Goran needed a wild card, he’s down, his shoulder doesn’t work anymore, you’ll be fine, you’re this upstart,” Roddick said. “It didn’t really work out that way considering you aced me 42 times over the course of four sets. Your shoulder seemed good enough.”

“What you did to me in the third round was probably the single best serving exhibition I’ve been on the receiving end of,” Roddick remembered. “At that point in my career, and still to this day, I haven’t really seen anything like it. I can assure you it’s something that I never wanted to see again.”

Ivanisevic gained confidence quickly as the rounds ticked by. A week earlier, the Croatian and his rivals did not see him as a threat. Suddenly, his hopes were on the rise.

“I don’t know what happened there [during that tournament]. It’s still a mystery, it’s unbelievable,” Ivanisevic told ATPTour.com. “In the middle of the first week I felt good, I felt special, I felt something. To release myself from the pressure, I created two more Gorans.”

Read More
Remembering Emergency 911 Goran
Djokovic On Ivanisevic’s HOF Induction: ‘He Was One Of My Heroes’

Ivanisevic famously shared that there was Good Goran, Bad Goran and Emergency Goran at the All England Club, with the latter version only swooping in to save the day when absolutely necessary. Emergency Goran was not needed in the fourth round against Greg Rusedski, whom he defeated 7-6(5), 6-4, 6-4. And in the next round, he faced a player who looked up to him in Safin.

“You were one of my idols,” Safin said, before making a joke. “I guess you are the one who made me break so many racquets. Thanks for that. I paid a lot of fines.”

“His induction wouldn’t have happened unless I let him win that semi-final at Wimbledon in 2001,” Henman joked.

Ironically, tournament organisers gave Ivanisevic a wild card, and he then stopped perhaps Henman’s best chance at lifting the trophy, with a young Roger Federer upsetting Pete Sampras in the fourth round. In this three-day semi-final, Henman had a firm advantage, leading 5-7, 7-6(6), 6-0, 2-1 when rain forced play to the next day (there was no roof on Centre Court then). Henman lost just four points in the 15-minute third set.

And finally, Ivanisevic had his fourth chance to finish the job on the hallowed London lawns. This time, instead of Andre Agassi or Pete Sampras (twice), Rafter was in his way. 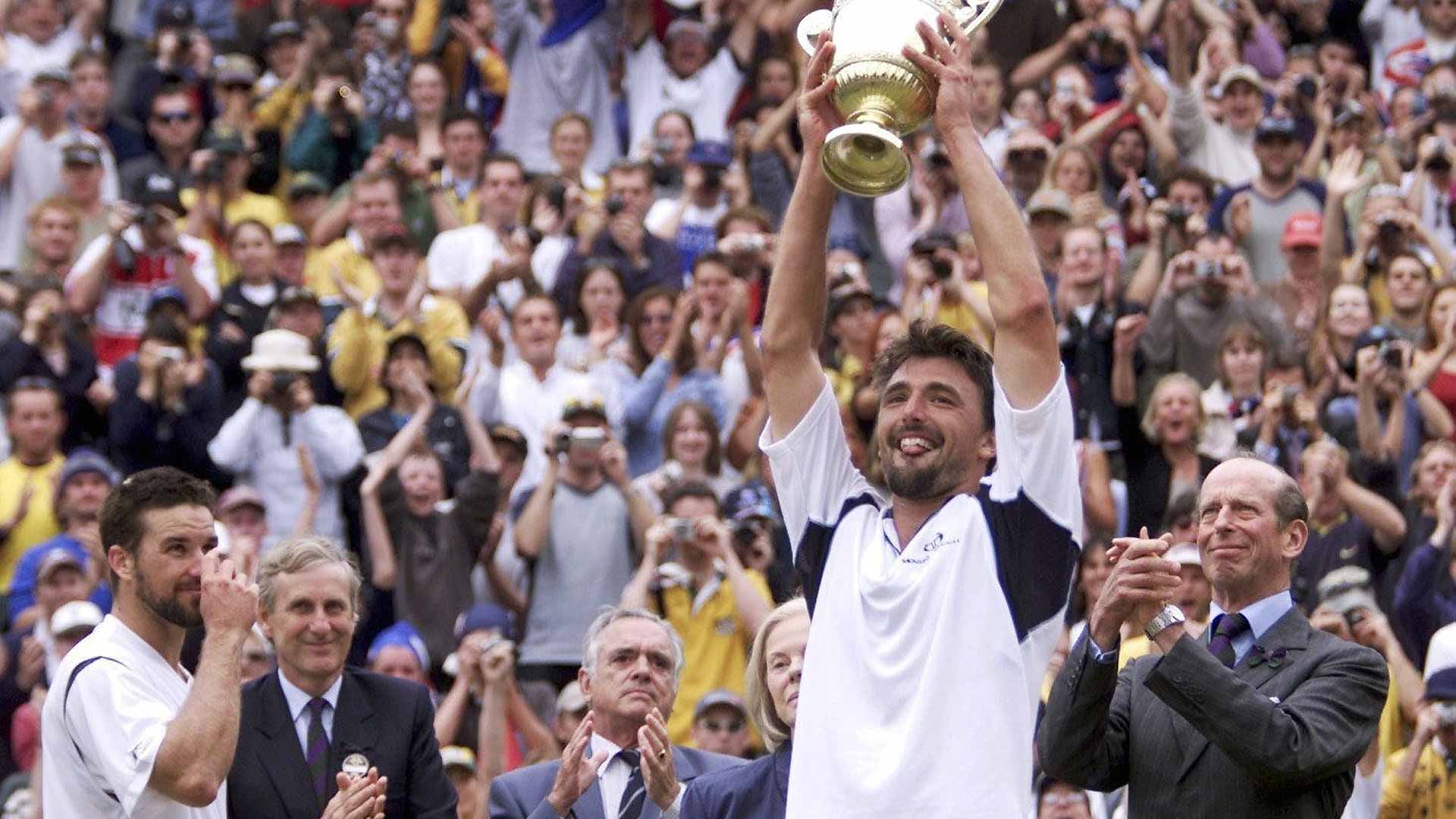 Goran Ivanisevic” />
Photo Credit: Bongarts/Getty Images
“We were all on the edge of our seats,” Roddick said. “Patrick was also one of my favourite players, but I think sentimentally with everything that you went through at Wimbledon with the close calls and the losses to Pete, a large part of the tennis community was cheering for you and was really happy that you finally got your moment at Wimbledon.”

Like in the semi-finals against Henman, Ivanisevic came within two points of defeat. And when he had an opportunity to close, it was not an easy finish. At a tribute dinner Friday evening, Ivanisevic likened the last game of his victory on that memorable Monday to two recreational friends playing on public courts. Rusedski remembers the moment well.

“I remember you praying, trying to get the same tennis ball when you served it,” the Briton said.

Ivanisevic finally earned his moment in the sun when Rafter missed a forehand return into the net. The lefty made history with his 6-3, 3-6, 6-3, 2-6, 9-7, leaving the Aussie devastated.

“My recollection of that match obviously was pretty crazy but I lost, you won,” Rafter said. “It was hard to take, but it was an amazing match in the terms that it created so much incredible atmosphere. I had to settle for second place.”