Hall Of Fame Awaits, But Which Goran Ivanisevic Will Be Inducted? | ATP Tour

Goran Ivansievic was late for his match. Fifteen minutes late! Searching the far extremities of Melbourne Park looking for a non-descript outside court, the annoyed Croatian stopped and asked himself, “What are you doing man? Why? What do you need? Stop.”

The former World No. 2 had to enter qualifying at the 2001 Australian Open after injury sent his FedEx ATP Ranking plummeting outside the Top 100. Ivanisevic lost his first-round qualifying match against Czech Petr Luxa, whose career-high was World No. 150. The Croatian was down in the moment, but he remembers a friend saying, “Do not stop. This is not the way you stop. You’re not going to be happy.”

Six months later, Ivanisevic triumphed in his fourth Wimbledon final. From his lowest low, the Croatian soared to his highest high. And on Saturday, just more than 20 years later, he will become the first player from his country to earn induction into the International Tennis Hall of Fame.

“I had a lot of ups and downs, doubts when you just want to quit and say, ‘Why are you doing this?’ [It is the feeling of being] on the top and then hitting the bottom,” Ivanisevic told ATPTour.com. “These battles, people just see the nice, beautiful side when you win trophies, but it’s a constant battle, a constant fight. That makes sports beautiful.” 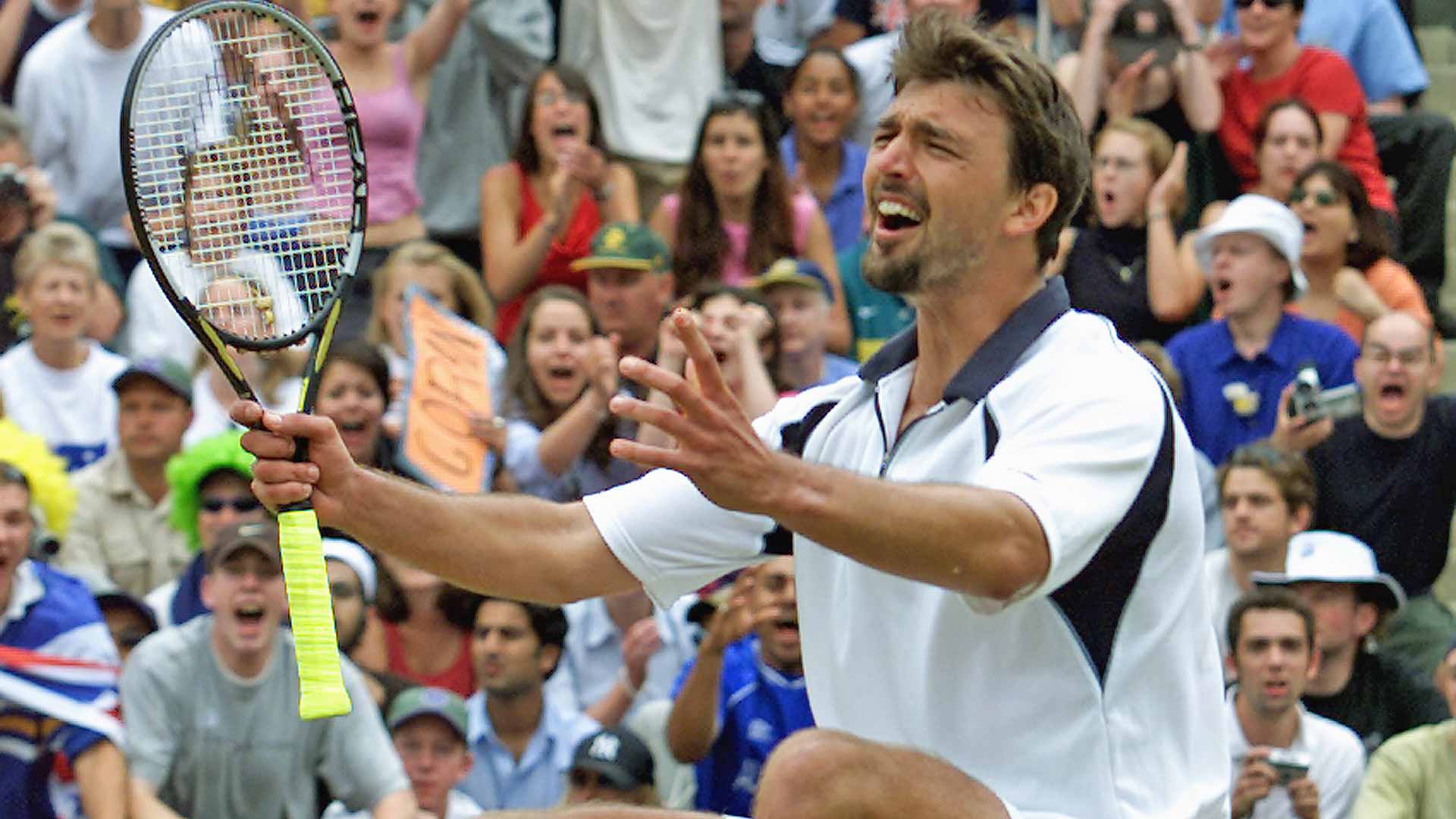 Goran Ivanisevic” />
Ivanisevic celebrates his 2001 Wimbledon triumph. Photo Credit: AFP/Getty Images
For a time, it appeared Ivanisevic would become synonymous with falling short at The Championships. The Croatian had won 21 ATP Tour titles and climbed to World No. 2 in 1994, both incredible accomplishments. But Wimbledon was his white whale, the hole in his resume that was becoming increasingly difficult to fill.

Ivanisevic fell short in the final three times, losing against Andre Agassi once (1992) and Pete Sampras twice (1994, 1998). He battled into a fifth set in two of those championship clashes, only to succumb in the decider. By 2001, reaching the winners’ circle at Wimbledon was a longshot. A shoulder injury had tamed his greatest weapon — his serve — and for a three-time finalist, Ivanisevic’s grass-court season was sub-par entering The Championships.

The lefty lost against World No. 194 Cristiano Caratti at Queen’s Club and the next week, he fell in the second round against Lleyton Hewitt in ‘s-Hertogenbosch. Ivanisevic admitted that he “played terrible tennis” entering the grass-court major. Something needed to change, and that led to Ivanisevic’s satirical creation. He revealed to the media during the tournament that there were three Gorans: Good Goran, Bad Goran and Emergency Goran, who interacted with each other during matches.

“I don’t know what happened there [during that tournament]. It’s still a mystery, it’s unbelievable,” Ivanisevic said. “In the middle of the first week I felt good, I felt special, I felt something. To release myself from the pressure, I created two more Gorans. People started to laugh and then I said, ‘Why not?’ They helped me during the matches. I had little talks with myself, with the other two Gorans.

“In the end it became an unbelievable story. [There were] three Gorans and after 20 years they still ask me, which Goran is here? Only one. One is enough. Those three Gorans made it happen. I probably needed three Gorans to win Wimbledon. With one Goran I could not win it, so I needed to create something special.”

Read More
Remembering Emergency 911 Goran
Djokovic On Ivanisevic’s HOF Induction: ‘He Was One Of My Heroes’

Ivanisevic’s road to the title was full of spikes. Among his opponents were three former World No. 1s — Carlos Moya, Marat Safin, Patrick Rafter — and a future World No. 1 — Andy Roddick — and somehow, in an epic Monday final, the World No. 125 defeated Rafter 9-7 in a classic fifth set to become the lowest-ranked Wimbledon men’s singles champion in history.

“Probably never ever is a wild card going to win Wimbledon. Never ever are we going to have an atmosphere like that at Wimbledon because of the roof now. It’s amazing,” Ivanisevic said. “I received millions of messages. I received millions of questions for interviews. I said, ‘Guys, I won Wimbledon 20 years ago!’ I’m always amazed and surprised how much this Wimbledon, even if it’s been 20 years, changed people’s lives, changed my life. It changed everything and because of that I am here today. It is special.”

Ivanisevic was past his physical prime. But mentally, he was able to summon a fortnight of magic in London.

“I should maybe get a degree in psychology, because I helped myself to overcome and to calm [myself] and do something different. That’s also kind of unbelievable,” Ivanisevic said. “It’s not only about tennis, it’s not only about hitting forehands and backhands.”

That triumph is a big part of why Ivanisevic earned induction into the International Hall of Fame. When the 49-year-old walked into the museum in Newport for the first time on Friday morning, he was taken back by the company he is joining.

“There is so much history, so many unbelievable names, trophies, people who created this sport, who changed this sport, who made this sport. Now I’m part of it,” Ivanisevic said. “I still don’t get that in my head at this moment, but it’s going to click in. It’s like I did something good in these 42 years since I started [my life in tennis]. It’s an unbelievable honour to be here.”

Karlovic On Ivanisevic: ‘He’s A True Legend All Over The World’

As happy as he is with his trophies, Ivanisevic is also proud of the benchmark he set for Croatian tennis players. The lefty paved the path for the likes of Ivan Ljubicic and Mario Ancic, who have been followed by Marin Cilic and Borna Coric among others. Ivanisevic coached Cilic to his 2014 US Open victory.

“They all followed me. It was unbelievable. I had my idols and then I became an idol of a lot of tennis players, which is unbelievable,” Ivanisevic said. “That makes me happy and proud that I contributed something for tennis.”

Today, Ivanisevic is one of World No. 1 Novak Djokovic’s coaches. Last Sunday, the lefty sat in the Serbian’s box as he lifted a record-tying 20th Grand Slam trophy. But he will forever be remembered for his accomplishments — and performances — on the court.

That remains the case ahead of Saturday’s induction ceremony, for which Ivanisevic admitted he will “probably be very nervous”. But through the soaring highs and devastating lows, the Croatian can now say that his legacy is set in stone in Newport.

“I’ve already changed my speech seven million times. But whatever speech [I give], there are a lot of people I’m going to thank. Because of them, I am here now,” Ivanisevic said. “After 20 years, if they still remember my final at Wimbledon, they’re always going to remember the three Gorans, one Goran, two Gorans. But they are going to remember the Goran who changed lives, who made them happy, who made them cry and really entertained them.”