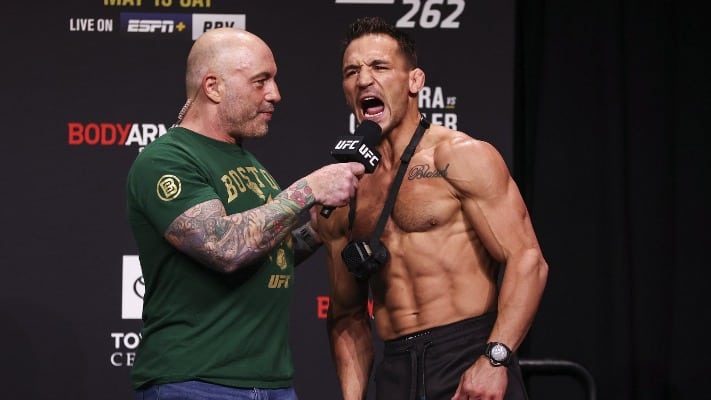 Former Bellator champion and UFC lightweight title challenger Michael Chandler will begin a new venture this weekend when he makes his broadcasting debut during ESPN’s telecast of UFC Vegas 31 at the UFC Apex facility.

Chandler will be joined by veteran UFC anchor Karyn Bryant, along with UFC welterweight Michael Chiesa at the UFC on ESPN desk. This will be Chandler’s first time being on an MMA broadcast as an analyst.

Chandler remains one of the biggest names in the UFC’s stacked lightweight division. He was rumored to be fighting Justin Gaethje for his next bout later this year, but nothing has been announced. He is fresh off his devastating loss to Charles Oliveira at UFC 262 for the vacant lightweight title.

Before joining the UFC last year, Chandler was one of the biggest names in Bellator which included two different reigns as the promotion’s lightweight champion. Some of his biggest wins have come against the likes of Benson Henderson, Dan Hooker, and Patricky Pitbull.

Chandler has quickly become a fan favorite since joining the UFC after knocking out Hooker at UFC 257. His forward-pressing style combined with his energetic post-fight interviews garnered the attention of fans from around the world.

The UFC has made it a priority to help their fighters prepare for the next stages of their lives and career path. Fighters such as Dominick Cruz, Michael Bisping, and Daniel Cormier have become stars in the UFC’s media realm.

The UFC Vegas 31 main event features a lightweight scrap between Islam Makhachev and Thiago Moises, along with the return of Miesha Tate in the co-main event facing the retiring Marion Reneau. Chandler will surely have a lot to talk about and will more than likely have a busy first night on the mic.

What are your thoughts on Michael Chandler making his first appearance on the broadcast desk this weekend?