July 17, 2011 was a momentous day. Happy anniversary to Brazil missing all four penalties in a Copa America quarter-final and finishing poor Elano’s career.

A narrow defeat on penalties is hard to take. You know this. Having the pendulum swing one way then the other, only for the opposition to finally drag themselves over the line, is the worst way to lose.

But what about a fully one-sided humiliation?

As a supporter, a humiliation might actually be better than a close-run thing. Having your expectations plummet with each scuppered kick isn’t exactly satisfying, but it doesn’t shred your nerves like an even contest does.

It doesn’t cruelly give you hope only to snatch it away; it gives you nothing.

A humiliation also lets you feel other emotions besides pain: there’s anger, for sure; embarrassment; but there might also be, if you permit yourself, a touch of amusement, a recognition of the absurdity of the situation.

For Brazil on 17 July 2011, the shootout pendulum simply didn’t swing. Or, it swung to Paraguay’s side, got tangled up in Fred’s two left feet, and stuck there. Brazil missed, missed, and just kept on missing.

Contrast that to what happened exactly 17 years prior, during the 1994 World Cup final. That day, in Pasadena, California, Brazil dispatched three penalties: Romario, Branco, Dunga.

The 2011 defeat to Paraguay was something else. Emotion was taken out of it. Four penalties so bad, you had to consume them as pure spectacle.

If Brazilian fans had any grounds for complaint after being dumped out of the 2011 Copa America — besides the fact that four of their players had just taken some of the worst penalties ever seen — it was that their opponents, unfancied Paraguay, had qualified for the quarter-finals without winning a game.

Thanks to the Copa America’s notoriously lax door policy, however, they still qualified as the second-best third-placed team.

In addition to those demoralising draws, Paraguay also lost their talisman Roque Santa Cruz to injury, meaning they would be taking a depleted forward line to the quarter-final in La Plata, Argentina.

Their opponents, on the other hand, had some of the most exciting young players in world football, including Ganso (21), Alexandre Pato (21) and Neymar (19), with Pato and Neymar having just scored two goals apiece against Ecuador.

But while Paraguayan fans didn’t have much to smile about watching their football team, they might have been somewhat inspired by their compatriot Larissa Riquelme, a famous model and actress.

“If Paraguay win the Copa America then I shall pose nude on the pitch,” she said. 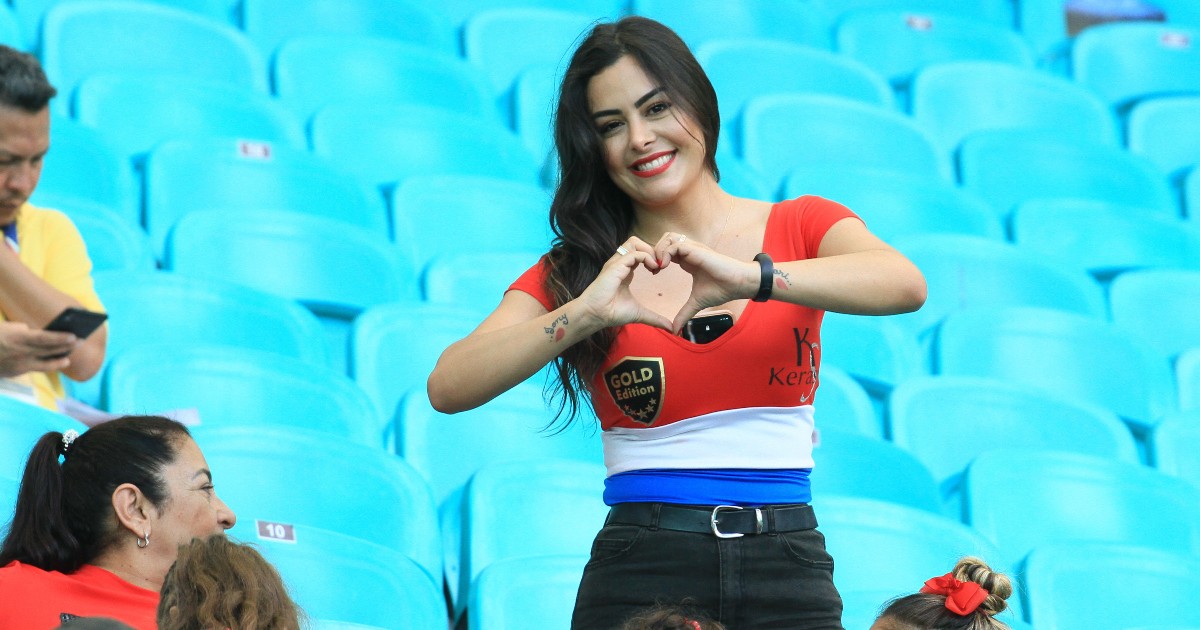 Over 120 minutes of football in the quarter-final, neither Brazil nor Paraguay could make a breakthrough.

Unlike their group-stage match which had produced four goals, this was an incredibly scrappy affair in which Brazilian dominance was ultimately trumped by Brazilian nervousness.

The most exciting event was a scuffle in extra time which saw Brazil’s Lucas Leiva (then of Liverpool) and Paraguay’s Antolin Alcaraz (later of Everton) sent off.

But the ensuing penalty shootout was a riot.

Opening proceedings was former Man City playmaker Elano, who was clearly trying to channel the energy of 1994 but ended up doing a Baggio, not a Branco, sending his kick far, far over the bar. In response, Paraguayan midfielder Edgar Barreto dragged his attempt wide.

That was as good as it got for Brazil.

Next up was Thiago Silva, then of Milan, whose meek side-footer was saved by ‘keeper Justo Villar, and Marcelo Estigarribia then took the best kick of the night to put Paraguay ahead.

Arguably the guiltiest party of the shootout was Brazilian left-back and restaurateur Andre Santos, who, having witnessed Elano accidentally convert a try, did exactly the same thing. (Needless to say, Arsenal scouts liked what they saw, and a deal was wrapped up less than two months later.)

Buoyed by Andre Santos’ shank, midfielder Cristian Riveros made it match point by scoring Paraguay’s third penalty, putting it high and out of Julio Cesar’s reach.

Cue the appearance of perennially unloved, eternally sad-looking striker Fred — actually having one of his best-ever seasons at club level — who stepped up and delicately curled the decisive penalty wide, making it a rare 0% conversion rate for Brazil and eliminating them from the tournament.

Maybe they had one eye on Larissa Riquelme.

Brazil’s penalty humiliation was, for fans in attendance, surely more irritating than heartbreaking. It lacked the balance required for emotional turmoil: Brazil’s kicks were a farce; Paraguay’s were a formality.

That being said, if anyone was emotionally impacted by the game, it was veteran midfielder Elano.

30 years old at this point, Elano had earlier in 2011 rejoined Santos in Brazil after six years in Europe. He might have hoped that a club-level relationship with Neymar and Ganso would prolong his international career.

In actual fact, that terrible spot-kick attempt — on his 50th cap — would turn out to be his last ever touch for the Selecao.

We don’t know how Elano feels about the miss today, 10 years later, but we can be fairly sure it got into his head.

Just 10 days after the quarter-final exit, Elano was back in action for Santos, playing in what would turn out to be one of the most iconic football matches of the modern era.

Santos were hosting Flamengo, and one of the major talking points was the meeting of future Brazil star Neymar and the recently revitalised Ronaldinho.

Neymar scored two goals — one of which, a Bergkamp-like madness, won the Puskas Award — while Ronaldinho, besting his successor, scored a hat-trick, including a sublime free-kick squeezed under the Santos wall.

Elano also left his mark on the fixture. In the 41st minute, with Santos 3-2 ahead, the midfielder stepped up to take a penalty. His panenka was so bad that Flamengo ‘keeper Felipe was able to do a couple of keep-ups after saving it.

Brazil boss Tite can win the Copa again – but can he win the love of his nation?

Can you name the all-time top scorer for every South American nation?

The making of O Fenomeno in Brazil: ‘It was as if he had come from the moon’

Elano at Man City: The rise and fall of a Football Manager hero turned real