Undisputed champions are a rarity in boxing, and the feat is only getting harder to accomplish with the proliferation of titles. After Bernard Hopkins became the first man to unify boxing’s “Big Four” sanctioning belts in 2004 and Jermain Taylor’s brief stint following Hopkins, we had to wait twelve long years before another fighter achieved the same status. Since 2017 we’ve been treated to a relative deluge of four-belt mega fights though, as first Terence Crawford, then Oleksandr Usyk, Teofimo Lopez (the WBC Franchise nonsense notwithstanding), and Josh Taylor were each crowned as undisputed kings of their division.

On Saturday night, at the AT&T Arena in San Antonio, Texas, we came within touching distance of adding another name to that distinguished list, as Jermell Charlo and Brian Castano fought to become the first to be called “undisputed” at 154 pounds since Winky Wright earned the distinction in 2004, and the first ever to hold all four belts. After twelve hard-fought rounds though, a split draw verdict means that both men retained their titles, and to crown another undisputed king we will have to wait for a rematch. 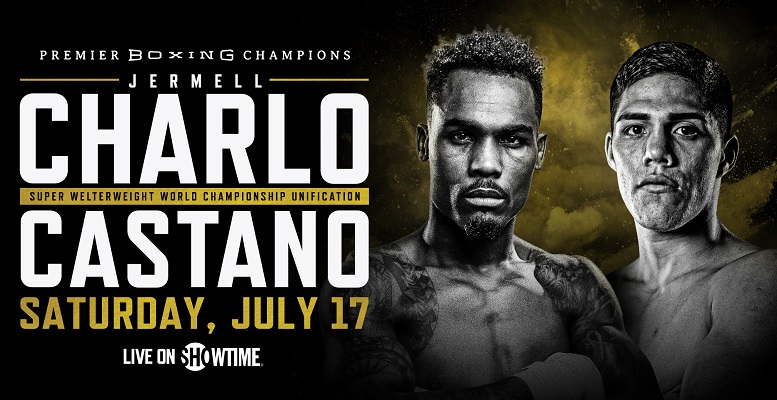 For Castaño, the judges’ verdict was surely a bitter pill to swallow. It was also his second split draw in four fights, having reached the same outcome against Erislandy Lara in March 2019. Two wins followed for the Argentinian, including a wide unanimous decision over Patrick Teixeira to capture the WBO title in February this year. The undefeated champion came in as the less experienced pro, with a 17-0-1 ledger, but a glance at Castaño’s impressive amateur wins over Errol Spence and Sergiy Derevyanchenko showed that he was clearly not to be underestimated.

Charlo, now 34-1-1, came in off the back of two of his most significant wins to date, gaining revenge for a bitterly disputed decision loss to Tony Harrison by eleventh-round stoppage, and then scoring an impressive knockout over Jeison Rosario to unify the WBC, WBA and IBF belts last September. The Texas native went in as a significant favourite, reaching as much as -300 with some Vegas odds makers, while Castaño started as a live +200 underdog. Tensions threatened to boil over at a heated weigh-in, as both camps had to be separated to prevent an all-out brawl. Thankfully, the fighters themselves kept their cool as they faced off, Charlo snarling intensely and Castaño smiling calmly – two contrasting characters looking equally focused on the task ahead. 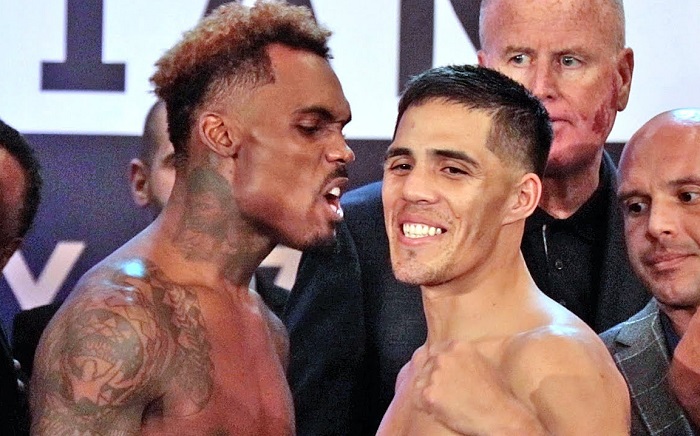 It got heated at the weigh-in.

With the stage set perfectly for an historic clash, the fight itself did not disappoint. From the first round the styles blended beautifully to produce an excellent contest, with two factors proving pivotal as the action unfolded. The first and most obvious was the battle for control of distance, as the shorter and stockier Castaño – standing 5’7 ½” to Charlo’s 5’11” and with a 5 ½” disadvantage in reach – sought to constantly close the gap to land his shorter punches, while Charlo attempted to dictate from range with the jab and land sharp counters on the inside. The second, equally crucial factor, was each fighter’s ability to hurt the other man once their preferred punching range had been established.

In the opening round it was Castaño who commanded where the action took place with his more aggressive, busier work rate, as Charlo tried to time him with single counter left hooks off the ropes. They missed in the first round, but the strategy paid off in round two as Jermell landed a hard left clean on the button, visibly hurting Castaño for the first time and then working well from a distance behind his longer punches.

Charlo used the distance well again in the third to keep Castaño at bay. But with only seconds on the clock and just when it looked like the round was in the bag, the Argentine unloaded a barrage, rocking the American with two big left hooks. Charlo stayed upright, but Castaño stole the round and seized the momentum in the fight. 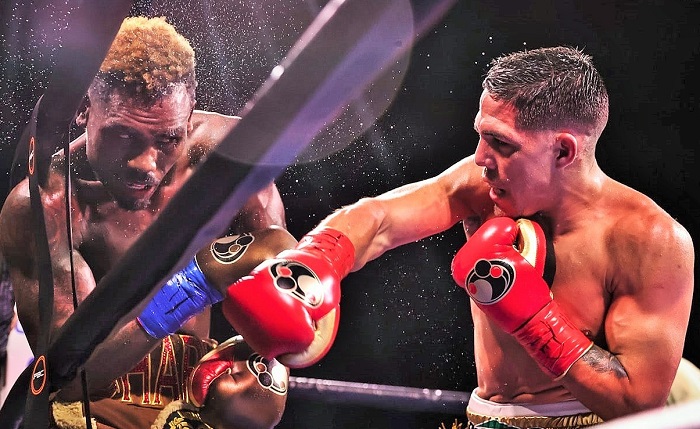 With his confidence restored, Castaño began to dictate the pattern of the action over the next few rounds, as he continued to close the distance effectively, back Charlo up and outwork him with combinations on the ropes. Charlo kept the action competitive and worked well at times behind his jab, and his left hook counters continued to pose a danger even when he was losing the battle at close quarters, but the Argentinian had a two round lead on my card at the halfway point.

By the eighth, it looked like Castaño’s busier work rate was pulling him further ahead, with a lovely short right hand finding its home. Charlo had his moments too, and clearly possessed the tool-set to give Castaño problems when he employed them properly, but he just wasn’t letting his hands go enough. According to CompuBox, after eight rounds Castaño had thrown more shots than Charlo in five of them, and landed more in seven of them. The official cards reflected the stats, with judges Steven Weisfeld and Tim Cheatham having Castaño in the lead by six rounds to two and five rounds to three, respectively, while judge Nelson Vazquez – somehow, incredibly – had Charlo in a 6-2 lead. Respected Showtime analyst, Steve Farhood, also had Castaño in a comfortable 6-2 lead at this stage, confirming the impression that the fight was slipping away from the local favourite. 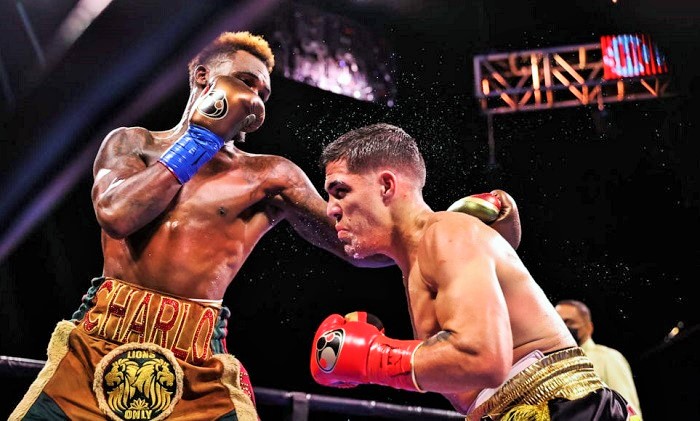 Between the ninth and tenth, head trainer Derrick James pleaded with Charlo, “more jabs, more jabs, back him up, back him down!” Taking James’ advice and looking refocused, Charlo started the tenth from behind a solid jab and then found the big shot needed to turn the tide. As Castaño pressured forward again and landed a nice left hook and right hand, Charlo exploded off the ropes with a peach of a left that shook Castaño and drove him back. With the Argentine on wobbly legs and looking hurt for the first time since the second, Charlo pursued and unloaded hard hooks to head and body. Castaño managed to ride out the storm and make it to the bell, but it was a massive Charlo round – one judge even scoring it 10-8, despite there being no knockdown.

Charlo’s power punching had finally shifted the momentum back in his favour, and he took the eleventh as well, though Castaño fought back gamely after his torrid tenth. Still, going into the final round, the instruction for Charlo from Derrick James was unequivocal: “You gotta knock him out!” Both men landed shots as they fought fiercely in the final round, but it was Charlo getting through with the slightly more eye-catching punches. He took the round and swept the last three on all of the judges’ scorecards, and with the late surge eked out a split draw. 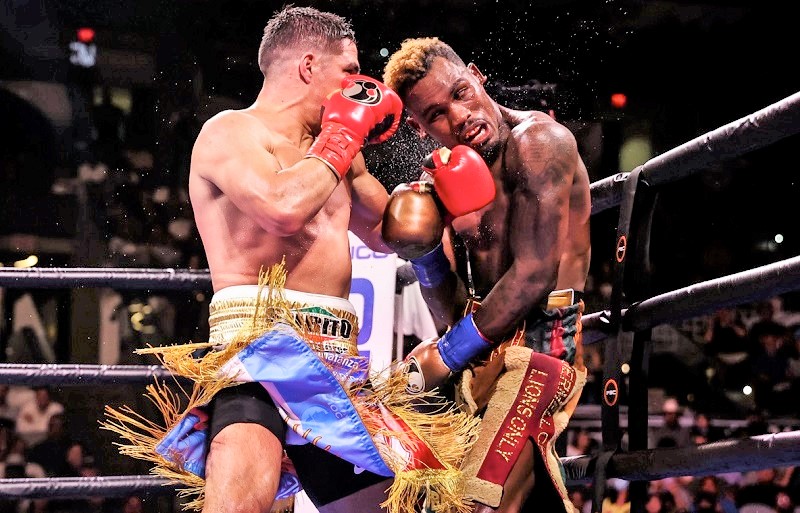 Given that it was such a closely contested battle in which both men had clear moments of ascendency, the draw overall seemed a reasonable result – although it has to be said that if either fighter could feel aggrieved at the verdict, it has to be Castaño. A closer look at the numbers showed that Castaño was the more active and accurate boxer, throwing and landing more overall (173 of 586 compared to Charlo’s 151 of 533), and out-landing Charlo in eight of the twelve rounds. Much significant though was judge Nelson Vazquez’s unfathomable scorecard: he had Charlo winning 117-111, or 9-3 in rounds, a disgraceful score and one which ignored the effort Castaño put forward.

Judge Weisfeld’s 114-113 card in Castaño’s favour (7-5 in rounds, with one 10-8 round for Charlo) seemed the fairest assessment, although judge Cheatham’s 114-114 card was also understandable. Veteran Showtime commentator Al Bernstein seemed to capture the mood best, when he said, “No one should be outraged over the draw [but] you can be outraged at the 117-111 scorecard for Charlo. That was absurd. But the idea that this fight ended up being a draw is not an outrage. It was close.”

Indeed. And now there is really only one way to settle who is the true champion at 154 pounds: an immediate rematch. It’s a simple formula, matching the best fighters in each division and pitting champions against each other. But once again, as with the Josh Taylor and Jose Ramirez battle for undisputed light-welterweight supremacy earlier this year, we’ve seen that it results in brilliant fights, divisional clarity, and ultimately the whole sport wins. Let’s hope we don’t have to wait too long to see it again.