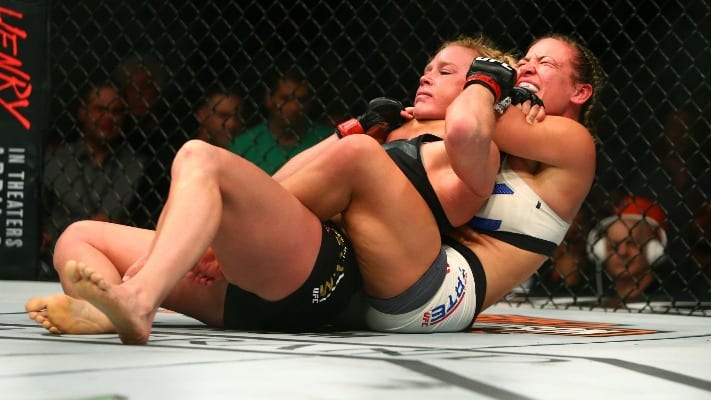 Holly Holm pre-emptively called out Miesha Tate ahead of her first fight in five years at UFC Vegas 31.

The former bantamweight champion took to social media to let fans know she’ll be tuning into the fights and to talk up a potential rematch with Tate who beat her for the 135lb title in 2016.

“You know I’ll be tuning in to watch the fights tonight,” Holm wrote on Instagram. “The beauty of a fight… anything can happen in there. It’s what makes it fun to watch. The future is unknown and every second counts. You can dominate a fight and it can still slip through your fingers in the last remaining minutes. I’d love to get the chance to redeem that loss. You want to see it too? Holm vs Tate 2?”

‘Cupcake’ looked sensational in the UFC Vegas 31 co-main event. Tate put on a dominant performance against Mario Reneau before becoming the first fighter to ever stop the 44-year-old in the third and final round.

At the UFC Vegas 31 post-fight press conference, Tate responded to Holm’s calls for a rematch.

“They’re all fair game, they can all get it, respectfully,” Tate said. “I expect them to come out of the woodwork. I think a second fight with Holly, it’d be great.

“There’s a lot of women in the division, so name them all. I don’t know where I’ll come in the rankings right now, but you know I’m never one to say I deserve this or that. I understand I have to continue to climb. But whoever’s name is on that list to get to the top, that’s fine with me. And I’m sure Holly and I, I have no doubt about it, her and I will fight again.”

“This is why I couldn’t stay retire, I felt like I had so much more to give and there’s truly a better version of myself,” Tate explained. “I didn’t want to leave thinking I didn’t put my best foot forward.”

Tate wants to fight again in 2021 and doesn’t have a specific opponent in mind, it just needs to be someone who takes her closer to a shot at Amanda Nunes.

“I want to let this victory settle, I don’t want to be in a rush, but of course I’m a woman on a mission,” Tate said. “I do want to get to the top. I think a fight by the end of the year is reasonable. I’m going to go home kiss my babies, enjoy this hard-earned victory, and in the next few weeks, my management and my team we’ll re-group and we’ll talk to Mick, Sean, Dana and we’ll get something lined up.” (Transcribed by Yahoo Sports)

Do you want to see Holly Holm vs. Miesha Tate 2?