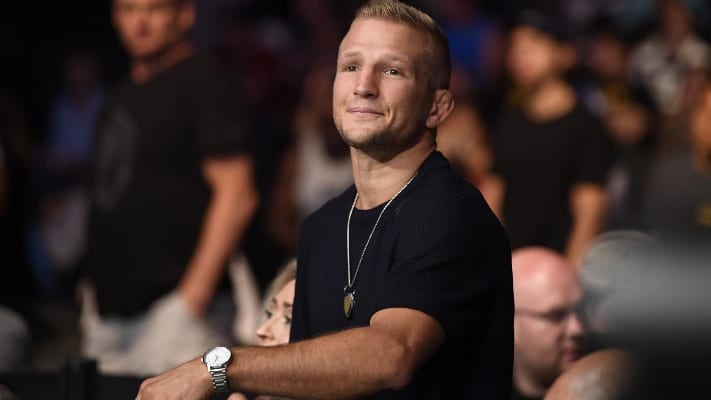 TJ Dillashaw is adamant he did not benefit at all from taking performance-enhancing drugs.

We have not seen Dillashaw inside the Octagon since January 2019 when he suffered a first-round knockout loss to Henry Cejudo in a flyweight title fight.

Following the loss, it was revealed that Dillashaw had tested positive for EPO. He was later suspended for two years and stripped of his bantamweight world title.

The 35-year-old is set to return to action next week. He’ll square off against Cory Sandhagen in what many believe is a number one contender fight. The winner of Dillashaw vs. Sandhagen will be next in line for a shot at the bantamweight title after Aljamain Sterling and Petr Yan rematch later this year.

During a recent appearance on Food Truck Diaries, Dillashaw claimed he didn’t get any benefit from taking drugs to boost his performance. The former champ says his willingness to fight Sandhagen in his first fight back makes that much clear.

“If I thought I got somewhere due to PEDs, I wouldn’t be calling out Cory Sandhagen,” Dillashaw said. “I wouldn’t be asking for the top five. … I’m going to be a f*cking animal when I get back in the cage.”

The Ultimate Fighter runner-up, also spoke in detail about the vigorous lengths USADA went to following his positive test, to try to slander his name.

“People can go say whatever they want about the decision I made, but USADA actually put me under a microscope when I got in trouble, man,” Dillashaw said. “They went back to all my fights that they ever collected my samples, retested all of them all the way back to [the Dominick Cruz fight]. Because they keep an A and B sample every time you get tested.”

“No matter what, it’s gonna be like that,” Dillashaw added. “I made the mistake. That’s like USADA’s weapon to use against you — to really slander you so nobody else wants to do this sh*t. Those questions are valid because I f*cked up, I made the decision. But me being able to live with that, me owning up to it has made it f*cking easy.” (Transcribed by Middle Easy)

Do you believe TJ Dillashaw? Did using PEDs have no positive impact on his performances in the Octagon?