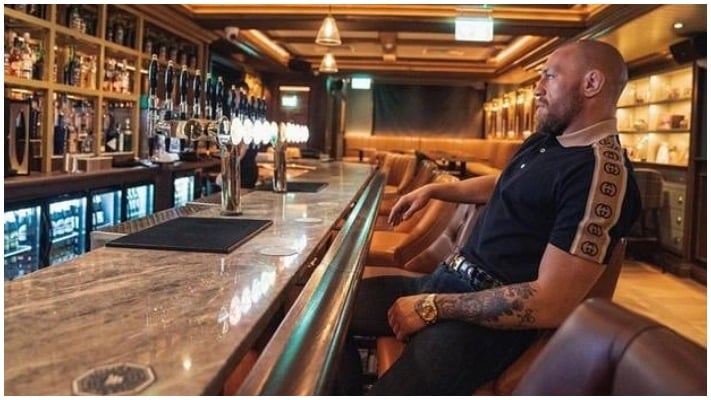 Conor McGregor takes his fans inside his new pub in a video released on social media.

The Black Forge Inn is one of McGregor’s many ventures outside of the fighting game. He initially bought the pub in the fall of 2020. It was actually the second time McGregor was connected to the bar; he allegedly assaulted a man there in 2017 (not to be confused with the man he would sucker punch two years later, though he would buy the bar where that incident occurred as well).

Over the past year, McGregor has been working on restoring the bar, reportedly to the tune of 3-million Euros. He finally deemed it worthy of it’s grand reveal, and did so with a video on his Twitter account.

The video is incredibly impressive. It’s shot entirely by a drone that starts outside before flying all around the interior of the building. It highlights the barroom and kitchen before flying around to show off the rest of the pub. The entire video is one shot. Kudos to the pilot, who somehow managed to keep the drone more steady flying around than I am walking.

There was clearly inspiration taken from a one-shot drone video of a bowling alley that went viral earlier this year after drawing the attention of ‘Guardians of the Galaxy’ director James Gunn.

The Black Forge Inn is located in McGregor’s hometown suburb of Crumlin, Ireland. According to the video, it is set to open July 26.

It appears as though McGregor will have plenty of time to look after the pub, as he recovers from a nasty leg break suffered in his bout against Dustin Poirier. There’s been no timeline given on when we can expect McGregor to return to the octagon, but his many projects outside of the cage are sure to keep him busy.

Will you be checking out Conor McGregor’s new pub? Let us know!