Darren Till Trolled By MMA Community Over Lookalike Video 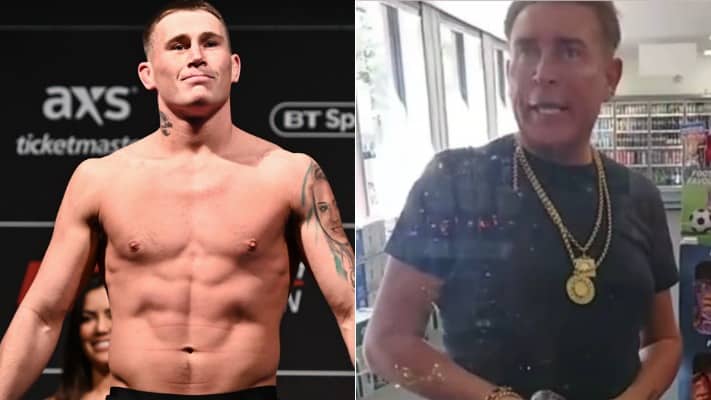 Darren Till is used to being the one doing the trolling, but he had the tables turned on him over the weekend.

In a video that has since gone viral after being initially uploaded to TikTok by user QueenOfScottyRoad, a belligerent man is seen arguing with a cashier in a Liverpool shop. Given where the incident took place and the appearance of the man, many in the MMA community made the connection to Liverpool’s own Till.

Without having a native ear, it’s hard to fully understand what is said between the two. However, it appears that the woman behind the cash tells the man – who is carrying a bottle of alcohol – that he is banned from the store for previously shoplifting. The man responds in disbelief and goes on a rant before ending with his apparent motto.

“You know what I always say? Times are hard and friends are few. Tara (meaning goodbye) to f—ing you!”

The video caught the attention of Ariel Helwani, who quickly shared it across his social media platforms. It spread like wildfire, and soon Till found himself the butt of a number of jokes.

For his part, Till has taken the jokes in stride. He responded on Michael Bisping‘s Instagram post, simply telling the fellow UK fighter, “Hahahahahaha fuck offff””

Let’s just hope Till can lay off the sauce and shoplifting long enough to properly prepare for his next bout. He is scheduled to meet Derek Brunson in the main event fight on August 14 but that date could change with a UFC London card in play for September 4. Currently, on a 1-3 stretch, Till will need the victory in order to stay in title contention.

For Brunson, the fight gives him an opportunity to run his winning streak to 5, and perhaps put himself near the front of the line for a shot at Israel Adesanya‘s title.

Do you think it looks like Darren Till in the video?