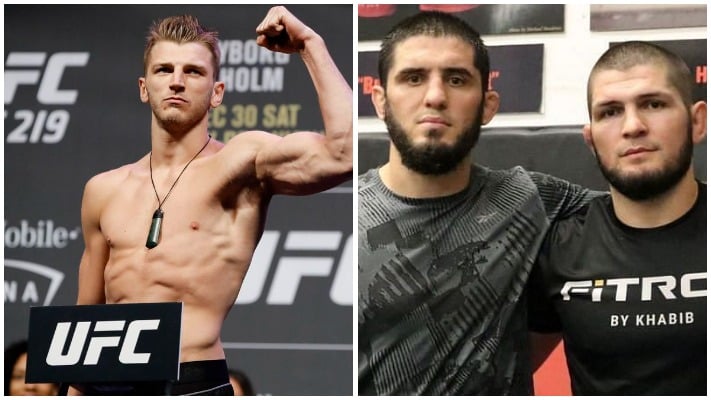 Dan Hooker is finding it hard to buy into the hype surrounding Islam Makhachev who many believe is the next Khabib Nurmagomedov.

The Dagestani fighter improved his record to 20-1 this past weekend and looked impressive doing so at UFC Vegas 31. Makhachev dominated Thiago Moises through four rounds before becoming the first man to stop the Brazilian submission specialist.

Hooker had said ahead of UFC Vegas 31 that he was interested in fighting Makhachev next but Khabib’s protégé didn’t seem to keen due to the New Zealander’s recent dip in form.

‘The Hangman’ didn’t take the comments from Makhachev too seriously.

“Oh, it’s just funny. Like, I don’t really care. I don’t really take it too seriously,” Hooker told Submission Radio. “Like, it’s just a bunch of banter to me. But if you dish it out, you better be able to take it. So, his reason [for not fighting me is] that I’m like three losses in my last six fights. And then in the same breath he calls out Tony Ferguson who’s lost three in a row. So, that makes about as much sense as shitting in a swimming pool. So, I don’t know what he’s on about.”

Makhachev has one blip on his impressive record. The 29-year-old was knocked out in his second UFC fight which came against Adriano Martins in 2015.

That one blemish is what is stopping Hooker from buying into the hype surrounding Makhachev who is being pushed as the heir to Khabib’s lightweight throne.

“He’s on a good streak at the moment, but I believe he’s been knocked out in the UFC before. So then him copying Khabib’s homework and saying all this wild stuff when you’ve been laid flat in the octagon, it doesn’t really have the same ring to it as an undefeated fighter.”

Do you agree with Dan Hooker? Does Islam Makhachev’s knockout loss make it harder to buy into his hype?