‘There’s A Lot More Crazy Sh* Than That’ 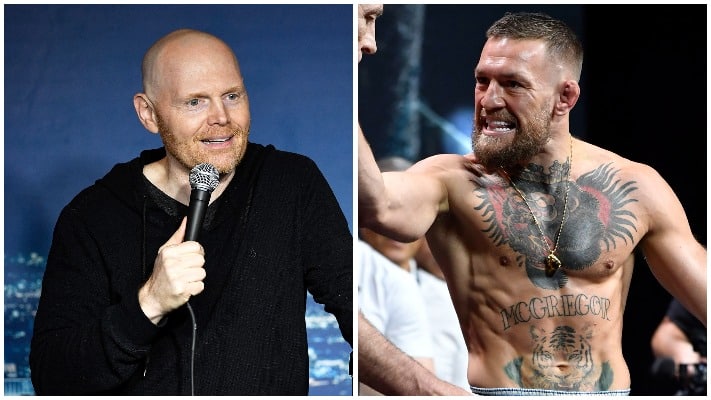 The Irishman has been in hot water with some fans for his trash talk in the build-up to and after his trilogy fight with Dustin Poirier at UFC 264.

McGregor made threats to kill ‘The Diamond’ and also made several crude remarks about the former interim lightweight champion’s wife – Jolie Poirier.

In some people’s eyes, karma got McGregor earlier this month as he was carried out of the Octagon on a stretcher after breaking his tibia and fibula.

Burr was sad to see the UFC 264 main event end in such an indecisive manner and bashed the social media critics who claim to have known how the fight would’ve played out.

“It sucks the way it ended,” Bill Burr said on his podcast. “I was rooting for Conor McGregor. I hate when an older — he’s only 32 — but when an older great fighter loses, I hate that thing where all these people on Twitter who haven’t had a fight since junior high like me start ‘Nyeah, you got your f—king ass kicked’ or something like that.

“Certain people, certain announcers, they enjoy when the champ gets knocked off their throne because a lot of people can’t handle how bad ass — and that’s the most bad ass thing ever, man or woman, to walk into an arena to fight, and to come out victorious? I don’t care what anyone in the crowd did, nobody is cooler than that. You gotta go to someone who’s a war hero to beat that.

“I wanted to see that second round to see what would have happened,” he continued. “Everybody seems to know what was going to happen, whatever. But ‘Oh Conor was coming back’ or ‘Dustin would have knocked him out.’ We don’t know now. I felt bad for Conor when he was sitting there. I know he was yelling all sorts of f—ked up s—t at Dustin but it was just like … I don’t know what that’s like.”

“I can be a comedian til I keel over, but these guys have a window, and it must feel as great for them as it does for me to do what I do. And I can’t imagine if my whole standup career was over at 32 and what am I going to do? So I think he was kind of in that headspace. And I think he was still trying to sell the next fight.

The 52-year-old defended McGregor’s UFC 264 post-fight antics and insisted ‘Notorious’ was just trying to sell a fourth fight with Poirier.

“Jesus Christ, ‘Your wife is in my DMs,’ Jesus. And Dustin saying he’s a dirtbag. They usually say all sorts of crazy s—t and then afterward they’re so nice,” Burr said. This is the only time I can remember where it sounded like pre-fight hype and then…. I like the people who are going, ‘He went too far, don’t say things about his wife.’ What are you talking about? They say all sorts of crazy things. ‘Oh, he said he was going to murder me.’ It’s like pffft.

“He didn’t say he was going to eat his children. He didn’t say, ‘I’m going to f—k you until you love me.’ There’s a lot more crazy s—t than that. He’s selling the fight and he’s Conor McGregor and if you fight him you make—” (Transcribed by MMA Mania)

Do you agree with Bill Burr? Has there been an overreaction to Conor McGregor’s trash talk?