Conor McGregor has Chronic Arthritis in Both Ankles, per Dana White 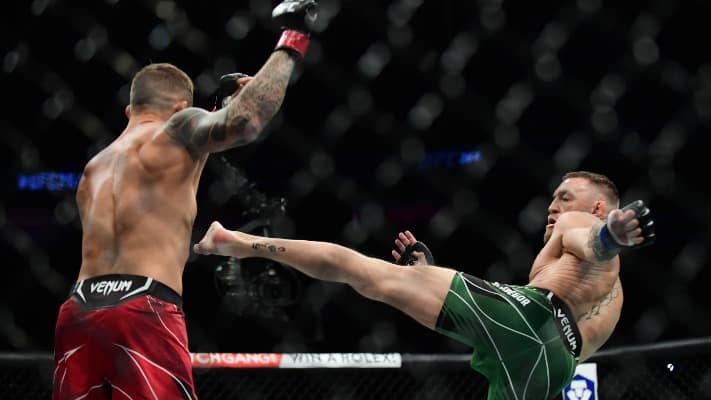 UFC president Dana White has claimed that former UFC double champion Conor McGregor has had ankle issues for years that may have played a part in his devastating leg break at UFC 264 against Dustin Poirier.

McGregor has used hard leg kicks for years, most notably in both Nate Diaz fights and at the beginning of the Poirier trilogy. McGregor suffered a fractured tibia towards the closing seconds of the opening round at UFC 264, stopping the fight immediately and resulting in McGregor leaving T-Mobile Arena on a stretcher.

White made an appearance on Fox News’ Watters’ World over the weekend, and told the host, Jesse Watters, that McGregor entered the UFC octagon at UFC 264 with issues in both ankles that have been bothering him for years.

“It’s gonna take him a year to recover from this one,” White said. “The fight game is a tough game. He’s had ankle issues for the last couple of years, and he asked if he could tape his ankles entering this fight but opted not to tape them. He has chronic arthritis in both ankles.”

McGregor has made waves recently since his devastating doctor’s stoppage at UFC 264, claiming that the UFC brass knew about his injury-related issues entering the fight and even went as far as saying that he was close to withdrawing from the bout due to leg problems. McGregor successfully underwent surgery following the event and is expected to start rehabilitation immediately with the hopes of a potential return sometime in early-2022.

Meanwhile, his opponent will battle Charles Oliveira for the UFC lightweight title later this year. Poirier will get his second shot at the belt after earning the interim title and then subsequently losing to then-champion Khabib Nurmagomedov at UFC 242.

In addition to revealing the extent of McGregor’s ankle issues, White has also said that a fourth fight between him and Poirier is likely in the future.

What are your thoughts on Dana White’s recent comments on Conor McGregor?

From the Archives: Overtime and Split Gates Divide Owners