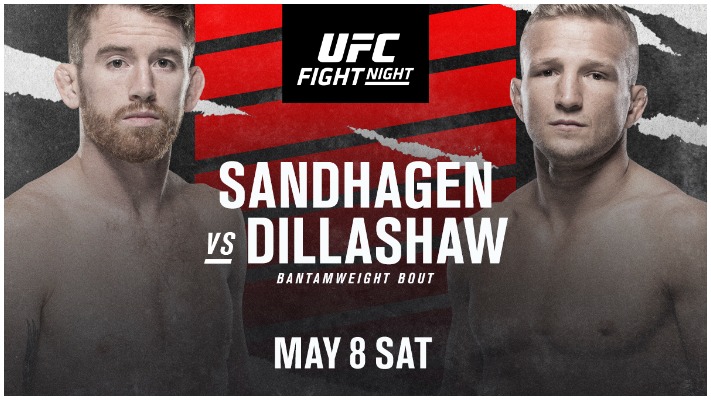 UFC Vegas 32 takes place this weekend behind closed doors at the APEX in Las Vegas, Nevada. In the main event, we have an exciting bantamweight match-up that we’re almost looking forward to more than our next game of 3 card poker online.

Cory Sandhagen and TJ Dillashaw will face off over five rounds to decide who is next line for a shot at the winner of Aljamain Sterling vs. Petr Yan II. The 135lb duo were originally set to square off in May but an injury to the former champion pushed this fight back a couple of months. UFC Vegas 31 boasts a strong undercard that promises to deliver plenty of big moments.

Join LowKickMMA as we preview, predict, and hopefully win some money betting on the UFC Vegas 32 main event and a selection of its undercard fights.

This is such a fun match-up with definite title implications. Cory Sandhagen has been in career-best form since falling short against Aljamain Sterling last year. The 29-year-old picked up successive Knockout of the Year contenders over Marlon Moraes and Frankie Edgar. He understandably enters the UFC Vegas 32 main even the favourite at -175. TJ Dillashaw will fight for the first time in more than two years after serving a lengthy suspension for PED use. The former 135lb king jumps straight back into deep water and the bookmakers aren’t totally writing him off at +150. We just have to back Sandhagen in this fight. Even a prime version of Dillashaw would struggle with the length and shot selection of ‘The Sandman’. This 35-year-old, off the couch and off the drugs version of Dillashaw is going to struggle. We’ll be backing Sandhagen to get the win that could potentially come by stoppage.

In the UFC Vegas 32 co-main event we will see another long lay-off come to an end. Aspen Ladd has been sidelined since December 2019 with injury issues. The bantamweight contender returns to the Octagon and should propel herself back into title contention against Macy Chiasson. We’ll be backing Ladd to emerge victorious despite and ring rust at odds of -175. If you fancy Chiasson to spring the upset, she’s priced at +150.

Before we get into breaking down this fight, let’s just take a moment to give the UFC matchmakers props. What a fight! Miranda Maverick and Maycee Barber are two of the brightest prospects in WMMA. Maverick has looked sensational since joining the UFC. The former Invicta champion has form on her side and for that reason is the -150 favourite in this fight. Barber is on a two-fight skid but showed signs of promise in her most recent defeat against Alex Grasso. We think she might just cause a slight upset and hand Maverick her first UFC loss at odds of +125.

Opening up the UFC Vegas 32 main card we have a welterweight match-up between Mickey Gall and Jordan Williams. Gall has never really been able to capitalize on big-name wins over CM Punk and Sage Northcutt. The 29-year-old two most recent losses came against Mike Perry and Diego Sanchez who really haven’t look anywhere near their prime in recent years. For that reason, we think the bookmakers are right to make him the -163 underdog against Williams. The Contender Series veteran showed all the heart in his UFC debut to go the three rounds with Nassourdine Imavov at middleweight. Williams has now made a smart move down to welterweight and we think it’ll pay off when he makes good on his -188 favourite tag at UFC Vegas 32.

Who will you be betting on at UFC Vegas 32?