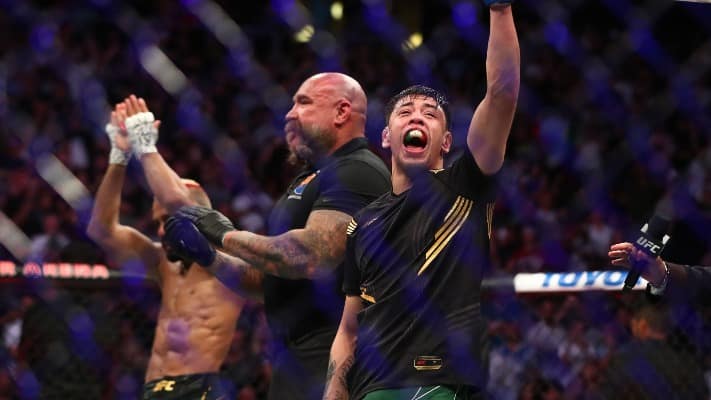 UFC flyweight champion Brandon Moreno is still awaiting his first title defense as champion, but it sounds like it won’t be former champion Deiveson Figueiredo.

Moreno is just beginning his reign as the newly-crowned flyweight champion, and discussions have already started regarding who he should fight later this year when he defends the belt. A trilogy bout between Moreno and Figueiredo has been thrown into the conversation, but the new champion doesn’t seem too keen on it happening right away.

“There are a lot of possibilities,” Moreno said in an interview with ESPN. “I think it’s obvious Figueiredo wants the next one because he lost the last one. But man, last fight I dominated him since the first minutes of the first round. I dominated him — in the striking, in grappling, in wrestling. Obviously, I’m open to fighting again with him. But I think he needs to fight again with somebody [else].”

“I don’t care the name. I just want to fight on that date.”

Moreno has basked in the glory that comes with being the new king of the UFC’s flyweight division. He attended a soccer game featuring the Mexican National Team and also met with Andres Manuel Lopez Obrador just weeks ago. As of right now, he’s looking at returning to the octagon sometime later this Fall or Winter.

After the loss, Figueiredo blamed a poor weight cut as a major reason for losing by submission to Moreno. He has only vouched for himself on social media for an immediate rematch despite the second fight between the two of them not going his way.

The UFC’s flyweight division has completely resurged over the past couple of years, with the Moreno-Figueiredo rivalry being one major reason for the rise in popularity. Top contenders Brandon Royval and Alexandre Pantoja will also compete at a UFC Fight Night next month with hopes to face Moreno next.

Do you think Brandon Moreno should grant Deiveson Figueiredo an immediate rematch?