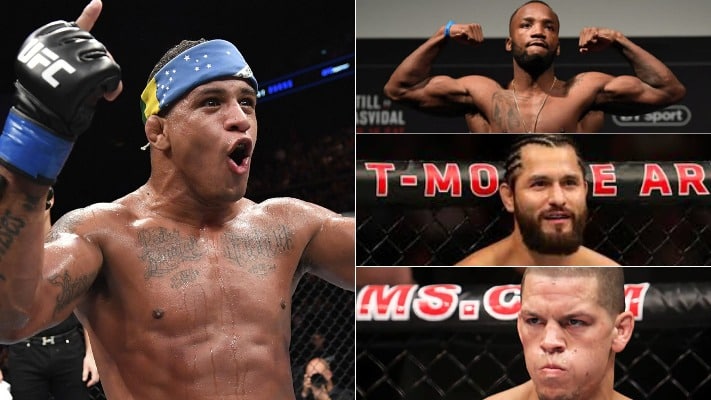 Gilbert Burns has yet to hear back from any of the men he recently called out, and he’s getting tired of waiting.

Burns returned to the win column at UFC 264 with a unanimous decision victory over Stephen Thompson. While it was far from a standout performance, Burns did what he needed to do to get the victory over a top contender. Following the win, he used his post-fight interview to list off a list of names he wanted to face next.

Two weeks later, he’s yet to get a reply from Leon Edwards, Jorge Masvidal or Nate Diaz.

Apparently growing tired of waiting for anyone to respond, Burns took to Twitter to call them out again.

In a crowded welterweight division, it would be easy for a fighter to get lost in all the commotion, so it’s probably a good idea for Burns to keep his name floating out there. That being said, all 3 of the men he’s looking for fights against have made it clear they’re only interested in title shots or fights that will promise big financial gain. Despite being a former title contender, Burns isn’t either of those.

Still, you can’t blame him for shooting his shot. And, given that there’s only so many fighters that can fight for the title at once, Burns is bound to face a top contender at some point.

The only question is, will he get his wish and have the fight happen sooner rather than later?

Who do you want to see Gilber Burns fight next? Let us know!