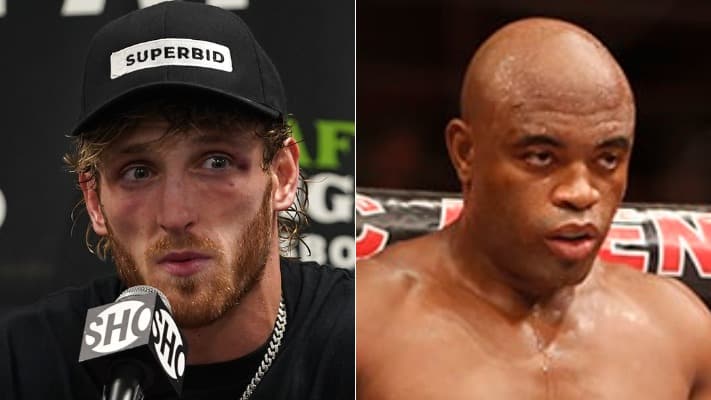 A boxing match between UFC legend Anderson Silva and YouTuber turned Boxer Logan Paul is allegedly in the works for September, according to DMs leaked by Bellator fighter Dillon Danis.

The rumors swirled on social media after Danis leaked a direct message from Viktor Doria, a BJJ black belt who asked Danis whether or not he would be interested in competing in a grappling match under ADCC rules on that date. Doria alleged that a “huge event” was being targeted for September 19th between Paul and Silva.

Paul and Silva have reached fought in the boxing ring recently after Paul competed against Boxing hall of farmer Floyd Mayweather in Miami while Silva defeated Julio Cesar Chavez Jr. in his return to the ring. The Paul brothers, Logan and Jake have been active in the boxing world stemming from their high following on YouTube and other social media platforms.

After a rough end to his UFC career, in which he lost five of his last six fights, Silva is turning the page towards the next chapter of his fighting career despite being 46 years old. His lone win over that stretch was a unanimous decision victory over Derek Brunson at UFC 208.

While nothing has been officially discussed outside of a few alleged DMs between Danis and Doria, the discussion of a potential fight between the two is sure to be intriguing. Logan’s brother, Jake is slated to face former UFC welterweight champion Tyron Woodley next month and it sounds like Logan could potentially continue the recent boxing vs. MMA rivalry against Silva.

Paul is still winless over his boxing career, losing a split decision to fellow YouTube personality KSI in late 2019. His fight with Mayweather wasn’t an official contest due to the wide discrepancy in weight between the two competitors.

What do you think about a potential boxing match between Anderson Silva and Logan Paul?