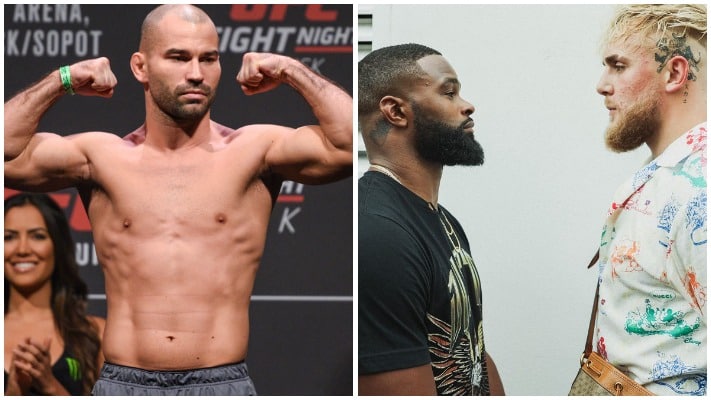 Artem Lobov respects Jake Paul as a boxer but dislikes him as a person and is hoping to see Tyron Woodley “put him back in his place” on August 29.

The YouTuber has been pursuing a professional boxing career since 2020 and has picked up three quick wins against extremely low-level opposition.

On August 29, Paul is taking what many believe is the first real fight of his career when he squares off against former UFC champion, Tyron Woodley.

‘The Chosen One’ has serious punching power and has been fighting the best guys in MMA non-stop for years now. Although he’s clearly on the back end of his career, many expect Woodley to cause an upset next month.

In an interview with LowKickMMA, Lobov explained why he respects Paul’s transition to boxing and his willingness to fight someone of Woodley’s pedigree so early in his career.

“Jake is training. He is a boxer. He’s not just a YouTuber anymore,” Lobov said. “He’s the guy that’s been training in boxing. I have seen a lot of guys giving him stick for his opponent buts check any boxers record at the stage of the career that Jake Paul is at, they fight more or less the same guys, they don’t take on much tougher opposition.

‘The Russian Hammer’ went on to say that personally, he’s not a fan of Paul who has been relentlessly trolling his teammate, Conor McGregor, as of late.

“As a person, I’m not gonna lie I don’t like him,” Lobov stated. “He doesn’t come across well ever and he’s very, very disrespectful. Yeah, I don’t really like him in that sense. I hope Tyron Woodley beats him. I hope Tyron Woodley gets one for the MMA guys and puts him back in his place.”

Are you with Artem Lobov? Do you hope to see Tyron Woodley beat Jake Paul on August 29?