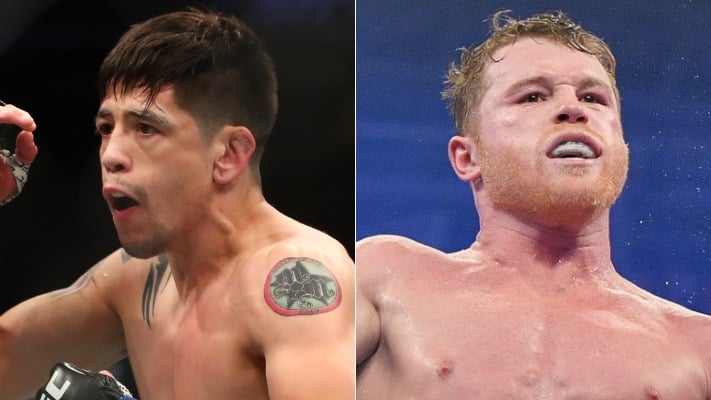 Despite the newfound fame that comes with being a UFC champion, UFC flyweight titleholder Brandon Moreno is still looking to improve his game; and recently worked with fellow countryman Canelo Alvarez on body striking.

Moreno earned the UFC’s flyweight belt earlier this year in a submission win over Deiveson Figueiredo, in a rematch of one of the greatest fights in UFC history. Alvarez is a multiple-division boxing champion with his latest win coming over Billy Joe Saunders. Alvarez and Moreno are arguably two of the biggest stars hailing from Mexico due to their wide variety of accomplishments in combat sports.

Moreno recently got to meet Alvarez and his team, having a friendly conversation which turned into Alvarez also giving the reigning flyweight king some tips when it comes to body strikes. In a video released on Moreno’s Instagram story, Alvarez unleashes some ferocious body shots to a large punching bag while also giving Moreno some tips as to how he is able to generate so much power from his lower half.

After the meetup, Moreno shared photos from the encounter and expressed how much he appreciated learning from one of the fight game’s very best.

“An honor to meet Canelo and his team today,” Moreno posted. “For me, it is a pleasure to meet people that I really admire inside and outside of sport, thanks for the advice.”

Alvarez and Moreno are both in a holding pattern as each Mexican star awaits their next opponent in their respective sports. A fight between Alvarez and Caleb Plant is reportedly in the works for September, while Moreno is expected to make his first UFC title defense sometime later this year.

One thing is for sure, it appears Moreno’s next fight won’t be a trilogy with Figueiredo. Moreno recently shared his thoughts on giving Figueiredo an immediate rematch and conveyed that the former champion needs to win a fight or two before getting another shot at his belt.

Who do you think Brandon Moreno should fight next for his first title defense?