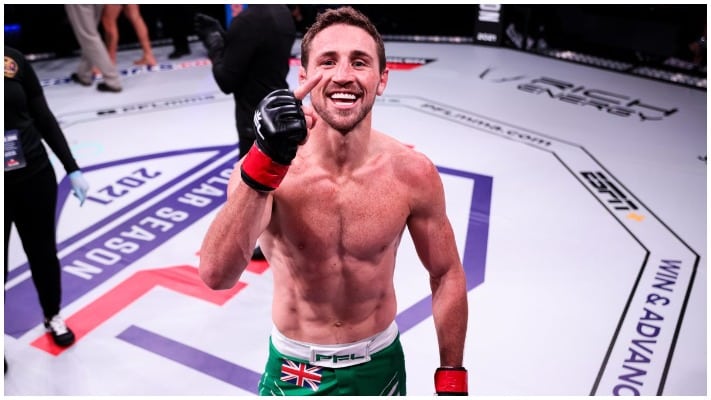 Brendan Loughnane is hoping he’ll square off against Bubba Jenkins for the chance to win $1 million in the final of the PFL’s 2021 featherweight tournament.

First up, the Englishman has the not so easy task of overcoming Movlid Khaybulaev in the PFL Playoffs on August 27.

On the same night, Jenkins will try to get by Chris Wade at PFL 9.

In a recent interview with LowKickMMA, Loughnane explained why he is hoping to face Jenkins in the final but is doubtful that fight will actually happen.

“I think it’s good [for the PFL] because Bubba opens his mouth. I open my mouth. We’re not scared to say what we think, and we’re not scared to say how we’re going to get the job done,” Loughnane said. “I think he’s a pretty popular guy in the states being a national champion and things like that. So I just thought that me and him would make a great final, but I don’t think he’s going to get to the final. I think Chris Wade is going to beat him. I really do, after watching his last fight. I think that Chris Wade’s gonna stop him in the third round. I mean, hopefully, he gets out [passed Wade], but if it doesn’t and it’s Chris Wade, let’s go!”

Despite looking ahead to what’s next, Loughnane insists he is not overlooking his upcoming fight with Khaybulaev.

“Yeah, I’m definitely not looking past Movlid. Movlid’s a dangerous guy. He’s probably the most well-rounded guy in the tournament,” Loughnane said.

“It’s going to be a tough fight. He’s a good wrestler. He comes from that Dagestani pedigree. It’s not going to be an easy fight, but that’s not what I signed up for. So I’m excited to test my skills.”

“I’m the top seed. I’m the one on the crazy win streak. Like, you know, you don’t change win formulas. I’m just going to work my ass off like I do every day. And I’m going to come in the best Brendan.”

Do you think Brendan Loughnane will progress to the PFL play-off final?