I Was About To KO Conor McGregor Before Guard Pull 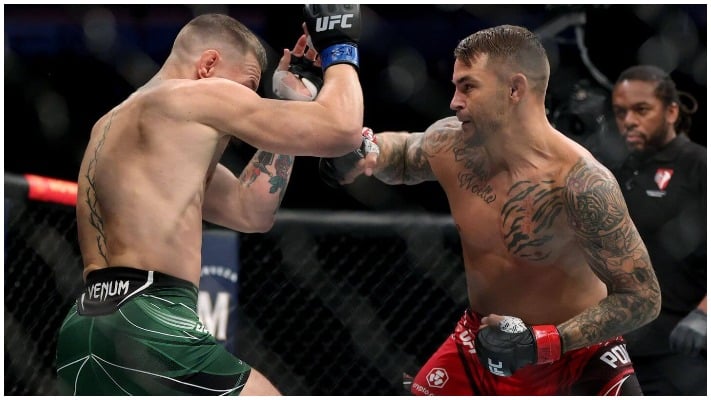 Dustin Poirier insists he was about to stop Conor McGregor in the first round at UFC 264 before the Irishman pulled guard for a submission attempt.

‘Notorious’ looked good early against Poirier in their trilogy bout. He was landing lots of legs kicks and punches. However, midway through the opening frame the tide dramatically turned in the former interim lightweight champion’s favour.

Poirier appeared to hurt McGregor on the feet before ‘Mystic Mac’ pulled guard and tried to lock up a guillotine choke. ‘The Diamond’ fought out of the submission and proceeded to drop nasty ground and pound for the majority of the remaining minutes of round one before both men popped back to their feet with seconds remaining on the clock. A missed punch from McGregor led to appeared to be an awkward fall on his ankle. The fight was quickly waved off and it was later revealed that the former dual-weight UFC champion had broken his tibia and fibula.

During a recent interview with Teddy Atlas, Poirier claimed he was on the verge of knocking McGregor out again before the fight hit the mat.

“We threw crosses at the same time. I slipped his and I kinda threw a looping cross that touched him good,” Poirier said. “Now I know. I saw the same eyes I saw in Abu Dhabi when I hurt him on the feet. He makes a certain expression, and his reaction is a certain way when he’s hurt and now I’ve seen it twice. It’s hard to explain but I know, and I saw exactly what I saw in Abu Dhabi when I had him hurt. So, he was hurt. Before the grappling and clinching and the takedown and all that he was hurt on the feet. I really feel if he wouldn’t have engaged in the clinch I think I would’ve finished him there. I saw the same look in his eyes and I knew I was a punch or two away from sitting him down.”

Poirier believes McGregor’s submission attempt was born out of a desire to escape the tough spot he had found himself in on the feet.

“He definitely didn’t want to be in that position, but he knew at that same time he wasn’t being punched, he was protected. Maybe it’s not a good position but it’s a better position than he was in,” Poirier said. “As a fighter we know those little battles that happen in the fight. They’re small battles that happen in the big battle and that’s what that was. That was him protecting himself, maybe (thinking) ‘ok, I may be on my back for a little in this round but I’m not going to get finished on my feet’. He was hurt and he was protecting himself. That’s what I really think happened there.

Do you think Dustin Poirier was on the verge of a first-round knockout victory before Conor McGregor pulled guard at UFC 264?