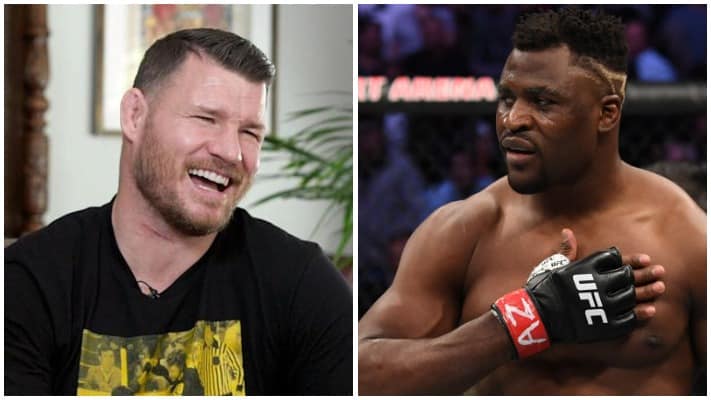 Michael Bisping can’t believe there’s a man on this earth willing to allow Francis Ngannou to punch him full force in the balls.

The UFC heavyweight champion is set to star in Jackass 4 and has described his time on set with Johnny Knoxville, Steve-O, and the rest of the crew.

“That’s the craziest thing that I’ve ever seen. Man, I had to punch somebody in the nuts,” Ngannou said during a recent appearance on the Flagrant 2 podcast. “I did it the first time, (and they said) ‘Listen man, we know you. People know that you’re the hardest puncher in the world. It wasn’t hard enough.’ I was like ‘Are you kidding me? Like… I could hurt this guy. Did he at least have kids or something?”

Bisping discussed Ngannou’s Jackass stunt on his Believe You Me podcast and insisted no amount of money in the world could convince him to take a nut shot from arguably the biggest puncher in MMA history.

“This is ludicrous. This is crazy,” Bisping said. “They’re going to let Francis Ngannou punch them in the balls as hard as he can. Punch them in the nuts for Jackass 4. That’s insane. There’s just no way…. (That’s like) a Toyota Prius going at a healthy pace. Your Uber driver takes his eye off the road for a split second and where does he hit you? Right in the balls. Listen, I don’t know man. How much money would they have to pay you for Francis Ngannou to punch you in the balls as hard as he can? There’s no way! There’s no amount of money! That would explode a testicle!

“Francis Ngannou will pop your balls. They will explode like a balloon.” Bisping added. “If he punches you with bare knuckles to the testicles, it’s a bad day at the office. Simple as that.”

“Your testicles are going to explode. They really are. They are not designed to withstand that impact. I don’t know what’s the hardest you’ve been hit in the balls, I don’t know what mine is either but still, it’s not that hard. It doesn’t equate to a Francis Ngannou death punch but whatever it was, it god damn hurt.” (Transcribed by MMA Fighting)

Do you agree with Michael Bisping? Is no amount of money worth a nut shot from Francis Ngannou?