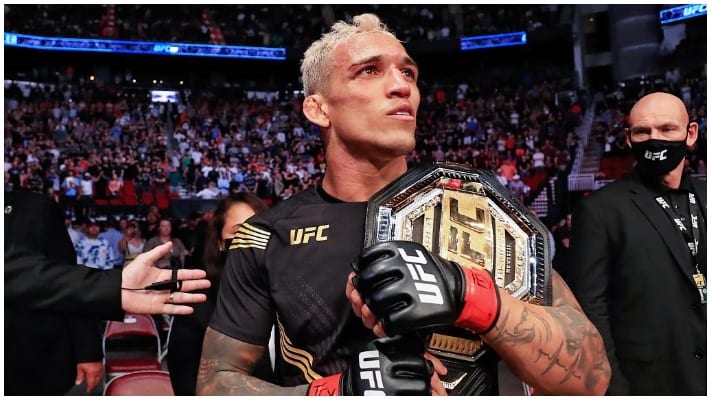 Charles Oliveira has given an early prediction for his potential fight with Dustin Poirier.

‘Do Bronx’ picked up the vacant lightweight title earlier this year. The Brazilian survived a tough first round before stopping Michael Chandler in the second frame of their five-round fight.

Poirier cemented his status as the top contender at 155lbs earlier this month. ‘The Diamond’ looked great early against Conor McGregor before the bout ended in unfortunate circumstances as ‘Notorious’ suffered a leg break.

It now appears a lightweight title fight between Oliveira and Poirier is inevitable.

During a recent interview with MMA Fighting, Oliveira revealed how he expects the fight to play out.

“I believe the firepower in my hands, but I think in a fight against Dustin, I believe I can submit him,” Oliveira said. “Working with my hands, with my strikes, I would definitely cause a lot of damage and then submit him.

“He deserves all the respect in the world for everything he’s done, but I’m not worried about what people bring to the table against me,” Oliveira said. “I worry about what I’m going to add to my game. I have firepower in both hands, everybody sees how much I’ve evolved on the feet, and I have my jiu-jitsu.

How do you think Charles Oliveira vs. Dustin Poirier will play out?