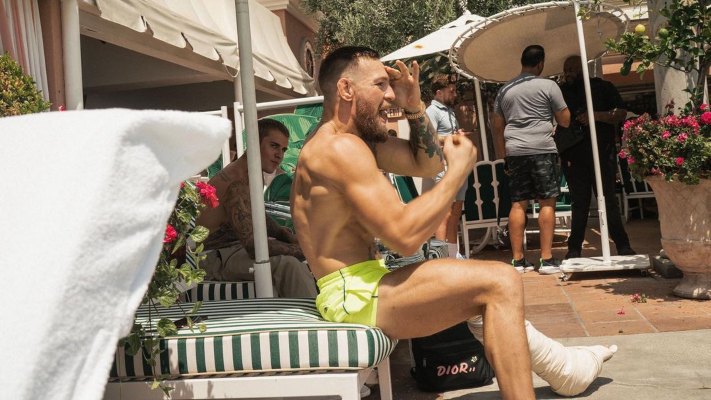 McGregor is coming off a trilogy bout against Dustin Poirier. The lightweight bout headlined UFC 264 inside the T-Mobile Arena in Las Vegas, Nevada. McGregor got things going with a slew of kicks. Things took a turn when McGregor dropped down for a guillotine and Poirier escaped the submission. “The Diamond” unloaded on ground-and-pound before McGregor was able to get back to his feet.

At the conclusion of the opening frame, Conor McGregor suffered a broken tibia. Poirier was awarded the victory via doctor’s stoppage.

Immediately after the fight, McGregor hurled insults at Poirier and his wife, Jolie. UFC President Dana White has said a fourth bout between the “Notorious” one and “The Diamond” makes sense. First, Poirier is likely due for a shot at UFC Lightweight Champion Charles Oliveira.

Despite the circumstances, McGregor appears to be enjoying life with pop star Justin Bieber in Beverly Hills.

McGregor recently underwent successful surgery. He will be on crutches for the next few weeks. McGregor has claimed that he injured his leg prior to the trilogy bout with Poirier.

“When you’re in the moment in the eye of the storm it’s kind of crazy, so I didn’t know his leg broke cause we both were punching at the same time. He went down then I started punching him. I didn’t know his leg was broke until the bell rang and I started walking away. He was sitting on his butt kind of holding his leg and I saw that his ankle and the leg was kind of hanging.

“There was no resistance, there was no bone there. It was just like a flap of skin there. That’s when I realized, ‘oh he broke his leg.’ As I’m walking to my corner, my cornerman runs in and we make eye contact and I say, ‘he broke his leg, this is over.’ But I didn’t know in the moment that it was broken.”