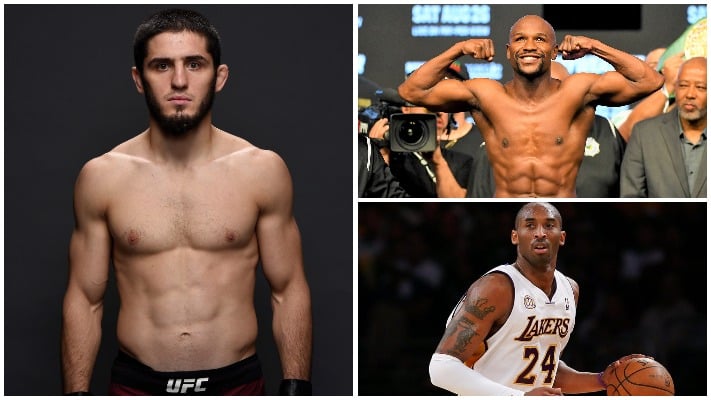 Islam Makhachev has earned high praise from ESPN boxing analyst, Max Kellerman, who has compared the UFC lightweight contender to Floyd Mayweather and Kobe Bryant who are both considered legends in their respective sports.

Makhachev made good on his first main event slot this past weekend at UFC Vegas 31. Khabib Nurmagomedov’s long-time training partner put on a dominant display against #14 ranked Thiago Moises before becoming the first man to finish the Brazilian in round four of their five-round fight.

Kellerman, who has been dabbling in MMA as of late, was full of praise for Makhachev after watching him beat Moises.

The First Take co-host even compared the Russian fighter to two of the most accomplished athletes of all time.

“[Islam Makhachev] reminds me, in his way, of Floyd Mayweather or Kobe Bryant,” Kellerman said. “The reason I’m saying that is, he takes the initiative. Even though it’s wrestling and it’s not obvious, there’s no big things happening — he is initiating, the other guy is reacting to him, and for every reaction, he has a counter… They not only have put the time in, that they have the technique, but they also think faster than the other guy. The more you struggle, it’s like quicksand, the worse it gets for you.”

Makhachev propelled himself into the lightweight top five at UFC Vegas 31 and can now look forward to testing his talents against the best of the best. At the moment, a fight with former 155lb champion, Rafael dos Anjos is in talks. The Brazilian recently took to Twitter to announce a deal is done for him and Makhachev to face off on October 30 in Abu Dhabi. However, Makhachev’s manager, Ali Abdelaziz, quickly shut down that claim and revealed his client is aiming to return to the Octagon in December.

Do you rate Islam Makhachev as high as Max Kellerman clearly does?