Logan Paul Opens Up As Betting Favourite Against Anderson Silva 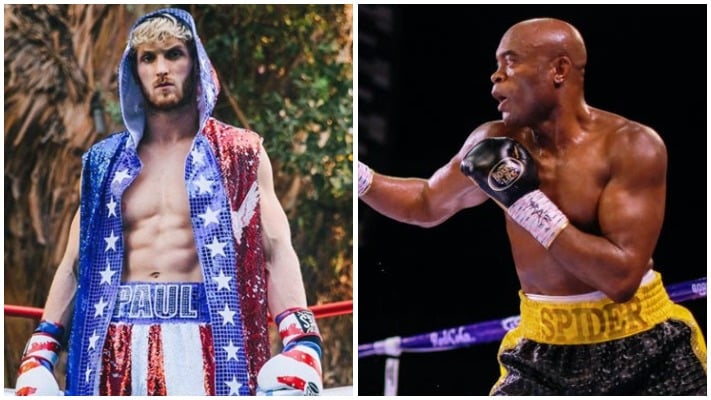 Logan Paul is the favourite in a potential boxing match with Anderson Silva according to the oddsmakers.

A fight between the YouTuber and UFC middleweight legend is in the works for later this year. Paul’s manager, Jeff Levin, confirmed the news to ESPN after rumours began to swirl about a September 19 fight in Abu Dhabi.

Now that the fight is officially in the making bookmakers have opened up the market for Paul vs. Silva.

Surprisingly, the novice fighter is being backed to beat the UFC Hall of Famer. Paul is priced at -200 while Silva is a +160 underdog. If you’re going to be putting money down on this fight or any other be sure to check around for all the best offers and betting sites.

Paul is fresh off a mega-money match-up with Floyd Mayweather. The internet celebrity to everyone’s surprise was able to go eight rounds with arguably the greatest boxer of all time with relative ease. Prior to that, he has only been involved in one professional boxing match which he lost to fellow YouTuber KSI. The pair also fought to a draw under amateur rules in 2018.

After a rough end to his UFC career, in which he lost five of his last six fights, Silva is turning the page towards the next chapter of his fighting career despite being 46 years old.

‘The Spider’ enjoyed an impressive return to boxing when he outpointed former middleweight champion Julio Cesar Chavez Jr. in their eight-round boxing match in June.

After his epic win, Silva talked up a potential fight with Logan Paul, he said.

“I respect both. I have a great relationship with both brothers, and yeah, I think this is possible, too. That’s entertaining. It’s a fight, but it’s entertaining. Logan and his brother are amazing guys. The people like to talk a lot about the guys, but they’re very good people. I respect both, and I respect the sport. I think everything’s possible. I think it’s the next fight may be with Logan Paul, maybe.”

Who will you be backing to win this fight? Logan Paul or Anderson Silva?