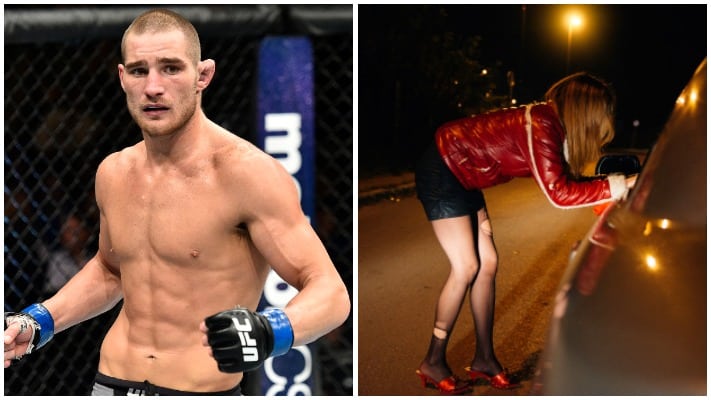 Sean Strickland is sick of seeing MMA fighters getting above their station.

The #11 ranked middleweight contender is set to square off against Uriah Hall in his first main event at UFC Vegas 33 on July 31.

“I don’t like when these assholes run around in suits and they make themselves seem like they are curing f*cking cancer. You’re locking yourself in a cage and getting punched in the f*cking face. You’re a dog. I’m a dog. Stop pretending to be something more than what you are. You’re a piece of meat used for entertainment. It’s one of those weird things to accept but it’s kinda the reality of it.

Strickland went on to talk UFC pay and compared the plight of MMA’s elite fighters to that of prostitutes.

“To further the advancement of the sport, I mean, you look at like, how much UFC guys get paid. I’m not knocking on the UFC, I f*cking love the UFC but it’s 14% of earnings as the NBA pays 50% to the players,” Strickland said. “When you get picked up in a limo and they rub your head and they make you feel like you’re a superstar. Meanwhile, on paper you’re kinda getting f*cked, understand that you’re a prostitute and that’s exactly how you would treat a f*cking prostitute.

“That’s something, when you’re getting f*cked by people they’re gonna make it feel like you’re not getting f*cked,” Strickland added. “But I absolutely love the UFC, best thing in the world. I get paid great. Nowhere in my life did I think I would be making the kind of money I am. I should be making less than minimum wage for my skillset. So, I love the UFC but let’s not f*cking look at us higher than what we are”