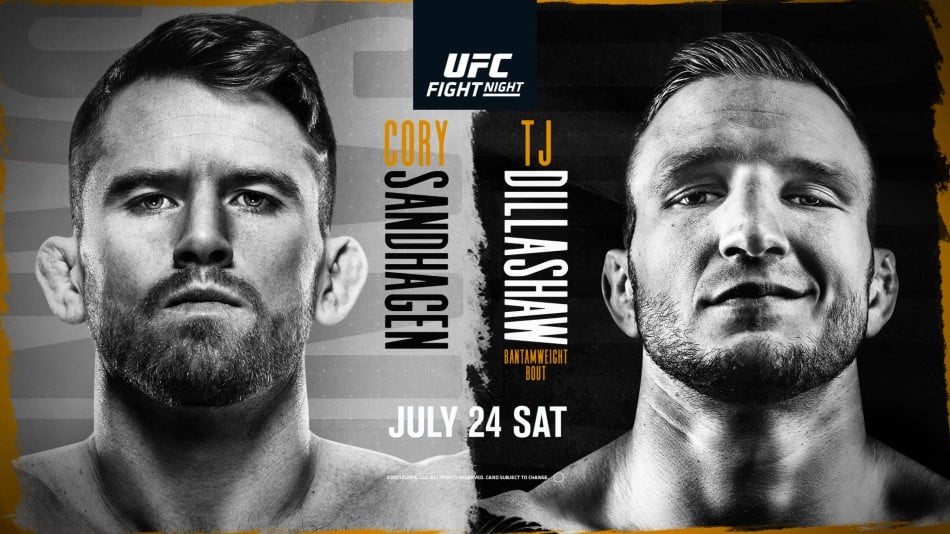 LowKick MMA will be bringing you UFC Vegas 32: Sandhagen vs. Dillashaw results throughout the night (Sat. 24th. July 2021) from the UFC Apex facility in Las Vegas, Nevada.

The pairing of Sandhagen and Dillashaw was originally slated to headline a UFC Vegas 26 event back in May until Dillashaw was forced to withdraw from the bout after he had suffered a laceration to his right eye after finding himself on the receiving end of an inadvertent headbutt during a training session.

Completing his two-year retroactive USADA suspension in January of this year, Dillashaw is slated to return for the first time since an unsuccessful flyweight title siege against Henry Cejudo at UFC Fight Night Brooklyn back in January of 2019 where he suffered a first round knockout loss. Post-fight, Dillashaw returned a positive test result for the banned substance, erythropoietin (EPO) — resulting in his two-year suspension.

The Angels Camp native’s most recent bantamweight outing came in the form of a first round knockout win over two-time foe and former champion, Cody Garbrandt in the main event of UFC 227 in August of 2018 — where he successfully defending his title.