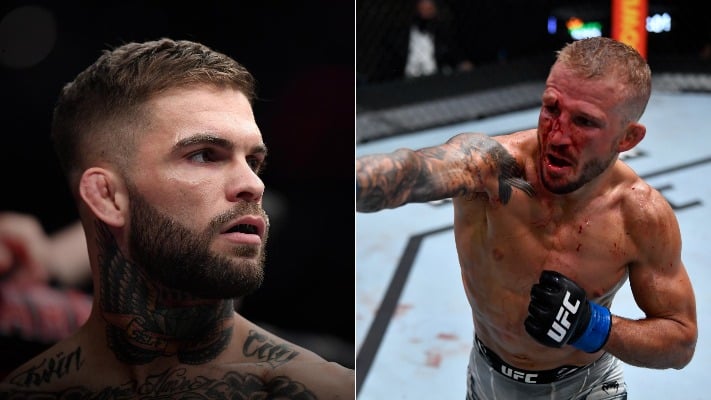 Cody Garbrandt kept it brief with his reaction to TJ Dillashaw vs. Cory Sandhagen.

In the main event of UFC Vegas 32, Dillashaw made his return to the Octagon. He had been away from action since January 2019 as he was suspended for two years by USADA due to EPO use. In the process, he relinquished the UFC Bantamweight Championship.

Dillashaw vs. Sandhagen was a five-round war. Both men had their moments in the fight but in the end, it was Dillashaw who was awarded the split decision victory. This is Dillashaw’s first win since Aug. 2018.

Garbrandt, a former teammate and rival of Dillashaw, had the following to say on his Twitter account.

Dillashaw has two TKO victories over Garbrandt. The first fight took place back in November 2017. Dillashaw captured the 135-pound gold a second time with his win over “No Love.” In the rematch, Dillashaw stopped Gabrandt in the first round to successfully retain the UFC Bantamweight Title.

Dillashaw had to battle through a knee injury at the end of the first round due to a leg lock from Sandhagen and a nasty cut above his eye. During a post-fight interview with Daniel Cormier, TJ Dillashaw discussed the cut and the knee issue.

“It’s the same cut that opened up twice before the last camp, so it was vulnerable. He hit me with a good shot. My knee, I popped it in that first round. I got lazy, I knew he had a leg lock and I was just chillin’ on top, got lazy and let him pop it there at the end. I couldn’t throw my hooks in. When I took him down, one time I tried to throw my hook in, my knee popped again. I had to bail out. So that kind of sucked, when I took his back my game plan was to throw the hooks in, and that went out the window obviously.”