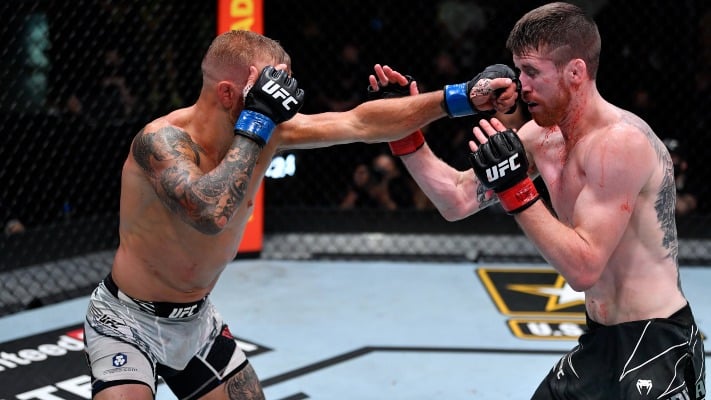 Cory Sandhagen has spoken out on his UFC Vegas 32 defeat at the hands of TJ Dillashaw.

Sandhagen and Dillashaw headlined the card inside the UFC Apex in Las Vegas, Nevada. Going into the bout, Sandhagen was the number two-ranked UFC bantamweight. Dillashaw hadn’t competed since January 2019 as he served a two-year sanction from USADA after popping for EPO.

The two did battle for five exciting and close rounds. Sandhagen was able to pop Dillashaw’s knee with a leg lock in the first round and caused a nasty cut above his eye. Despite Sandhagen’s efforts, he fell short in the bout. Dillashaw won the bout via split decision.

After the fight, Daniel Cormier asked Sandhagen if he felt he won the fight. “The Sandman” made his answer clear.

“Absolutely. I knew I made some mistakes early just trying to Granby [roll] too much, it wasn’t working I adjusted. I didn’t take any serious damage the whole time, man. He was kicking my leg but they weren’t compromising me at all. I don’t know, man I don’t know.”

Cory Sandhagen admitted that Dillashaw was more durable than he expected but he still feels he should’ve had his hand raised.

“No, I didn’t think he’d be able to take a shot the way that he was taking a shot. I think a lot of those shots knock a lot of people out. I had him hurt a number of times, I wasn’t hurt at all. I don’t know, man. Whatever, I should’ve done better though. I should’ve won.”

With the defeat, Sandhagen’s two-fight winning streak comes to an end. Barring any unforeseen circumstances, he will fall in the official UFC bantamweight rankings. Still, the loss isn’t likely to be viewed as a negative among the UFC brass as he delivered an exciting performance and almost defeated a former two-time UFC Bantamweight Champion.