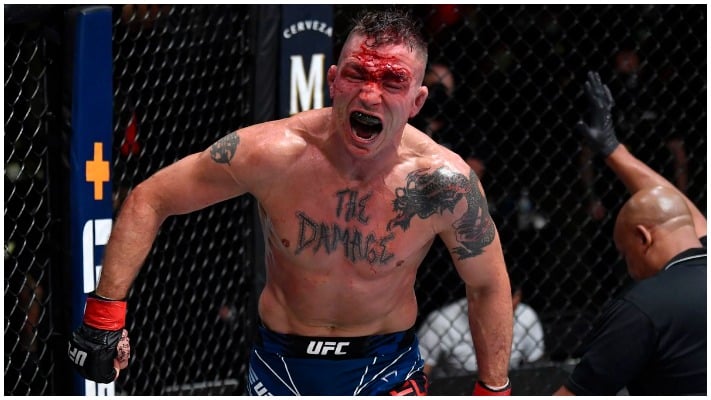 UFC Vegas 32 certainly delivered. In the main event, Cory Sandhagen and TJ Dillashaw went at it for five rounds with the former bantamweight champion ultimately picking up a split decision win in his long-awaited return to action.

Fight of the Night

In the co-main event, Kyler Phillips and Raulian Paiva went to war. Phillips started the fight well and appeared to be on the brink of taking out his opponent in round one. Amazingly, Paiva survived the early onslaught and rallied to potentially win the next two rounds. As the scorecards were being tallied many expected a rare MMA draw but that wasn’t to be. Ultimately, the judges awarded Paiva the win via majority decision. Phillips can consider himself hard done by. Hopefully, an extra $50,000 in his bank will somewhat soften the blow of this tough loss.

Performance of the Night

Just before that fight, we had an exciting match-up between Darren Elkins and Darrick Minner. In what proved to be a night of comebacks, Elkins arguably picked up the most impressive. The featherweight veteran was dominated in round one and seemed to be on the verge of being stopped by Minner. He somehow managed to survive and quickly turned the tables in round two. Minner appeared to have emptied his tank in the first frame and was defenceless on the floor as Elkins pounded away for the TKO win.

Performance of the Night

The people’s main event saw two highly rated bantamweight prospects square off. Adrian Yanez and Randy Costa entered UFC Vegas 32 with perfect records in the promotion. After a friendly build-up, things quickly got heated inside the Octagon. Costa was landing bombs throughout round one and Yanez was covered in the blood as he went back to his stool at the end of the frame. In another epic comeback, Yanez quickly turned the tables in round two. The now 3-0 UFC fighter ripped to the body and landed a beautiful uppercut to finish the fight and pick up a well-earned $50,000 bonus cheque.

Do you think the right people got bonus money at UFC Vegas 32?